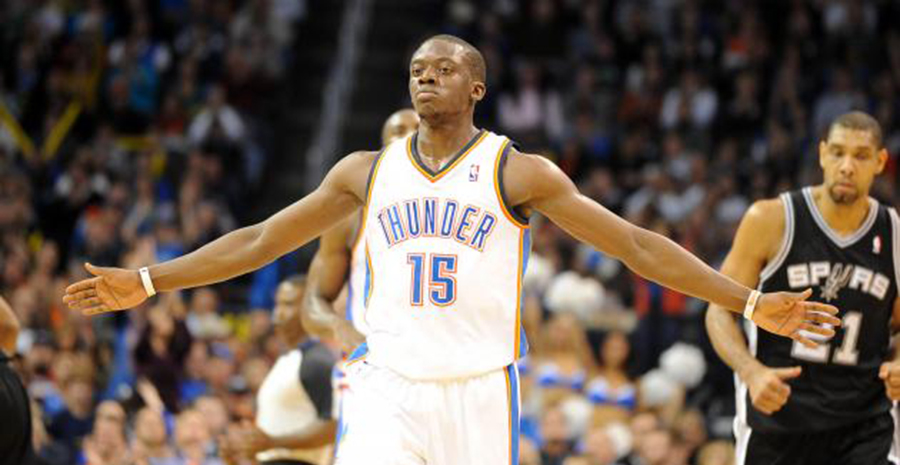 Whatever is in the water in Oklahoma City needs to be purified. Over the summer and into training camp, the injury train has slammed the Thunder. Most notably, Kevin Durant. KD injured, and ultimately, broke a bone in his right foot. Since then, Durant has undergone surgery and is slated to miss approximately 6 weeks. That puts him out until at least the second week of December.

Durant is not the only missing link. Promising rookie Mitch McGary is also sidelined for 6 weeks after suffering a fracture to his left foot. McGary stole the show at the Orlando Summer League where he showed off a silky mid-range game as well as the ability to create his own shot. Most notably, NBA analysts were impressed with his ball handling skills creating his own fast break after a defensive rebound. Most of the Thunder front office expected McGary to step in and immediately contribute.

The injury train continued to maul through the Thunder roster. Just this week, Reggie Jackson and Jeremy Lamb suffered a twisted ankle and back injury, respectively. Jackson, to many, was considered to be a leading scorer for the Thunder and possibly even be inked into the starting lineup. Jeremy Lamb is in his “make or break” year with the Thunder. He was the centerpiece to the James Harden trade and he hasn’t lived up to the hype yet. After this set back, Thunder fans have to wonder if he will ever pan out.

OKC opens up their season tonight (10/29/14) in Portland on national television. Here’s a breakdown of their active roster tonight, which will also be their roster against the Clippers tomorrow night. Yes, a back to back to start the season. Lovely.

There weren’t any omissions. That is it. These are the 9 guys who will be in uniform tonight when the Thunder open their 2015 campaign against a very good Portland team, and tomorrow night against the Clippers, who some say are the favorites in the Western Conference.

Is it time to push the panic button already in Oklahoma City? Or will this group hang around and be right in it when full strength? I think the fate lies in the return of Reggie Jackson and Jeremy Lamb. These guys will provide valuable minutes at the guard position. No one expects these two to miss significant time. If the Thunder can go .500 while Kevin Durant rehabs his toe, this could be a special season.

I can’t remember a time where a team took this big of a blow to start the season, but whom else would you rather have than Russell Westbrook to lead the charge while the league MVP waits in the wings.