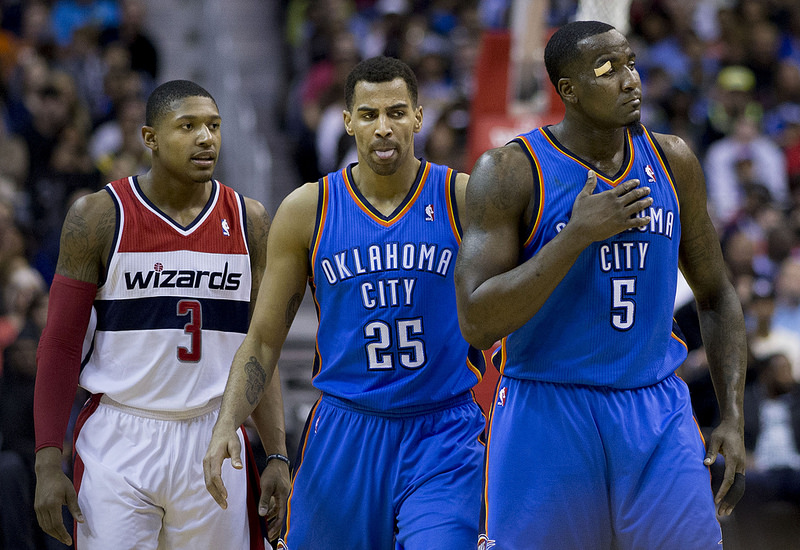 Are you a little concerned with what's happening in OKC?

Something just hasn't been quite right about this team since the all-star break. The team that was once thought to be the favorites coming out of the West have all the sudden surrendered the lead to San Antonio with the Clippers not far behind. So, what exactly is going on?

The defensive effort has been miserable.
Well, this is probably the most obvious answer. The defensive effort in OKC has been questionable at best lately. What was once a top defensive unit in the first half of the season has fallen off a cliff to now one of the statistical worst. Zach Lowe at Grantland does a good job of breaking down some of the poor defensive tendencies that have been creeping up as of late. To sum it up, the Thunder are over-crowding the lane and leaving shooters wide open on the kick out pass. You could say they were just running into hot shooting teams until Gerald Green and Jodie Meeks each torched the Thunder for career highs in back-to-back games earlier this month. Is it a lack of effort? Terrible defensive schemes? Missing players?

Two of their starters are injured.
Admit it, when Perkins and Sefolosha went down with injuries, you either silently rejoiced or at least assumed it wouldn't have much of an effect (if any) on the team. Despite what most fans thought, Thabo and Perk are important pieces on this team and serve a great purpose. I'll be the first to admit that I've screamed for Presti to amnesty Perkins for years now, but it's become increasingly evident the role he plays on this roster. I hate bringing up the intangibles that certain players bring to the table, but Perkins fits the bill. His stat line is always brutal, yet the defense seems to have a better identity about itself when he's on the floor. Maybe it's the constant communication. Maybe it's the toughness factor. Maybe it's something else. I don't know what it is, but it's something. Oh, and that little thing about missing their best perimeter defender in Sefolosha doesn't exactly help either.

Scott Brooks is in love with the veterans.
What happened to Jeremy Lamb? Remember that time he scorched the Rockets for 22 points back in December? How about when he netted a cool 18 points on 7-10 shooting vs Miami back in January? What happened, you ask? Caron Butler happened. Don't mistake this as a gripe about the Thunder acquiring Caron Butler. Butler is definitely a nice addition to the team, but there's no question that he has stolen away the majority of minutes that were going to Lamb. Lamb averaged 24.6 minutes per game in January, 18.8 in February, and a measly 10.9 thus far in March. Lamb appeared to just begin coming into his own this season and really contributing to the team. Then his minutes gradually dried up. Now it's virtually to the point where he's playing garbage time minutes only. Fisher and Butler have played well, but I'm not sure I agree with their expanded minutes coming at the cost of Lamb's.

It's a long season. Down periods like this happen to every team.
While I understand this line of thinking, there are still certain games that are hard to excuse.  Losses to the Cavs and Lakers stick out the most. Add in a 23-point home loss to the Mavs? Yikes. The same Mavs squad the Thunder had defeated 11 straight times. Brooks chose to sit Westbrook for the game, but this one wasn't lost on that decision. The thing that perplexes me is the loss to the Lakers and then win over the Rockets two nights later. The loss to Dallas and then win over Chicago one night later. Are the Thunder struggling to stay motivated against the league's middling teams? I suppose it's encouraging to see them come out and take care of business against the better opponents, but it is still ultra frustrating losing to teams they absolutely have no business losing to. This is a long and grueling season. Every team does go through lapses where motivation is lacking. I am beginning to wonder how long this lapse will last.

At the end of the day, there's still way too much basketball left to be played before anyone should get too terribly worried. I am definitely concerned though. This is a team that has a legitimate shot at a championship and there's no telling how long that window will remain open. Let's hope there's still a switch that can be turned on when needed be and this team returns to form to close out the season.