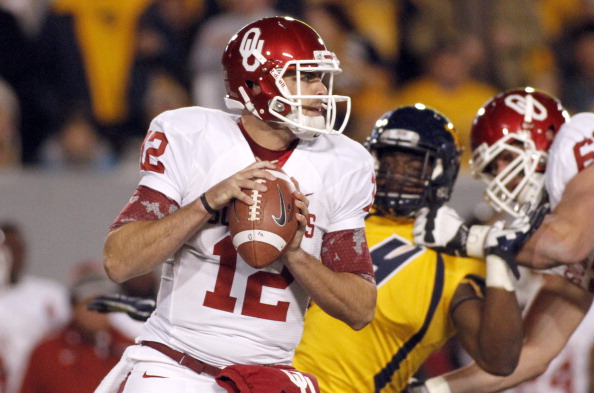 So the Sooners snuck out of Morgantown with a win, but didn't exactly build a lot of confidence heading into Bedlam week.

While the defense was the worst it's been in the history of Sooners football, there was one surprising bright spot: Landry Jones.

END_OF_DOCUMENT_TOKEN_TO_BE_REPLACED

I know, I know. I've ripped Landry Jones and ripped him on more than one occasion. Look, for all his faults, I've never said Landry Jones was a bad quarterback. What he is, is a wildly inconsistent quarterback. But Landry showed up to play last Saturday night and saved what likely would have been an epic beatdown had he not come through with one of the best games of his career. Save one terrible interception, Landry Jones played flawless including a check on 4th and goal to send Kenny Stills on a quick-slant route as opposed to the called corner fade route. Landry zipped in a perfect pass and Stills hauled in his fourth touchdown of the night.

The Sooners held on to win 50-49 and you can thank Landry Jones for that one. For as good of a game as Landry had, the defense had an equally epic bad game.

I could sit here and throw around some big stat-line numbers at you to prove just how bad the defense was, but take my word for it: they. were. awful.

Not awful as in getting gashed for a few big plays. Awful as in giving up the most yards in Sooners history. Awful as in allowing Tavon Austin rack up the 2nd most total yards in college football history.

OK, so I threw out a couple stats, but hopefully you get the idea. Mike Stoops should be embarrassed. Sticking with a loaded defensive back formation throughout the entire game even when it was clearly not working? Common Mike, you know better than that.

So the Sooners escaped with a win thanks to Landry Jones' heroics, but what about the upcoming Bedlam showdown?

Traditionally I would say that the combination of the game being played in Norman coupled with the fact that Weeden and Blackmon are now playing on Sunday's would lead to a relatively safe assumption of a Sooner victory. However, after dropping two home games already this season, I think we can agree that home field advantage is not what it used to be in Norman.

While OSU should be in a rebuilding year, they have quietly put together a 7-3 record and rank 21st in the BCS. Make no mistake, this is the furthest thing from a safe game for this Sooner bunch.

While OU is currently favored by a full touchdown, I think the line should be much closer. The simple fact is that it's impossible to predict which Sooner team will show up to play this Saturday. Will we get the aggressive and confident bunch who smacked around Texas at the Cotton Bowl earlier this season? Or will be see the tentative and hesitant bunch that took the field a mere two weeks later against Notre Dame?

I suppose I spoke out of turn last week crowning Kansas State the Big 12 champs with two games still left on their schedule. Baylor showed up to play and forced me to eat my words. Now the Big 12 title may be attainable for the Sooners, but they will still need some unfortunate help from the Longhorns next weekend (though I refuse to bring myself to rooting for the Horns, regardless). The Wildcats did screw up the Sooners clear path to a Fiesta Bowl though and now things aren't so clear.

One thing that is crystal clear, the Sooners must continue to win for any of it to even matter. Slip up this weekend against the Pokes? None of it matters. 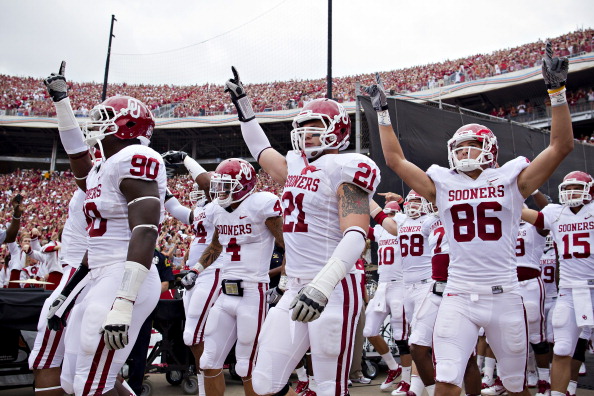 A question that has been on my mind throughout this 2012 college football season is this: Just how good is this group of Sooners?

That is a question not easily answered, but one I think I'm ready to try and tackle.

The short answer? Good, but not (yet) great.

END_OF_DOCUMENT_TOKEN_TO_BE_REPLACED

While this team is still on track for a 10-win season, they have to take care of business down the stretch to really have a chance at salvaging this season. On it's own, a 10 win season isn't anything to sneeze at, but 10 wins alone does not a great team make.

So the Big 12 title is likely not going to happen with the Sooners sole conference loss coming at the hands of Kansas State who would have to somehow drop two of their final three conference games for the Sooners to have a shot. Let's be honest, that's not gonna happen.

A more likely goal for this young bunch to set their eyes upon is a BCS game in January. Pending that the Sooners and K-State Wildcats both finish the season without another loss (as they both should), then KSU will be sent on to the national championship while the Sooners would appear to be a lock for the Fiesta Bowl. Not only the Fiesta Bowl, but also a likely showdown against one of the top finishers from the media-loving SEC conference.

A 10-win season and a Holiday bowl victory doesn't exactly get me all excited, but a potential 11-win season with a BCS bowl victory over a top SEC team? Now you're talking.

The Sooners still have a real chance at accomplishing something very special in 2012. The upcoming final three-game stretch that looked so daunting in the pre-season now looks easily winnable. The Sooners will be favored in each of their final regular season games and should see themselves ending up in the Fiesta bowl which they've become so accustom to over the recent past.

Forgive me if I don't buy into the SEC bias. Texas A&M didn't exactly dominate the Big 12 last year (or any previous year for that matter), yet they are now a powerhouse simply because they defeated the mighty Crimson Tide? Are we maybe over-valuing the SEC because of their recent national title success? Don't get me wrong, I realize the SEC has some of the top teams in the land, but are they really that much better than the rest? I don't think so.

This Sooner team is far from flawless and still have many roadblocks ahead before we can start talking a showdown with the SEC in the Fiesta Bowl, but the path has been laid out for them. Will this year's team regroup after an unprecedented two home losses and do something special? Or will they find a new way to squander the opportunity?

Bob, please don't squander this one.