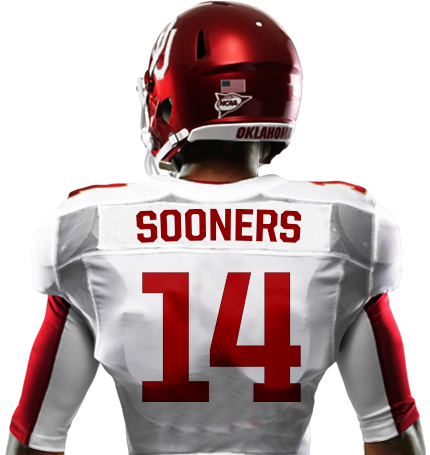 In Part 1 of the Sooners 2014 Signing Class, we focused in on the offensive side of the ball. Now let's dig in and take a closer look at the defensive signings. In this article, I'm going to introduce you to the newest Sooners, what we expect from them, and a former OU player comparison to the player. Feedback always welcome. These names will be in no particular order.

Curtis is a fast linebacker. He works extremely hard and isn’t afraid of contact. He will mix it up with anyone. He’s got a mean streak and relies on his speed to make the sure tackles. He’s a little bit small for his size, but the OU strength and conditioning department will make sure that’s all taken care of. There’s a lot of of room for development, but Curtis is that guy that won’t give up and he will make the coaches happy they’ve recruited him.

What we expect: A redshirt season is coming. It will do Curtis a lot of good to watch and learn the first year, and add a few pounds to make sure he has the pad level and strength to take on full backs and interior offensive linemen. He’ll make it to the field. The question is, when?

Jordan Thomas is a rangy cornerback. He possesses the speed you want at corner. He is also a ball hawk. He thrives on making big plays and has the length to contest any throw. He won’t be pushed around in the red zone and will make every play tough for the defender. Defensive Coordinator Mike Stoops has raved about Jordan since day 1. It seems like Jordan was that diamond in the rough that the coaches wanted all along. Jordan isn’t a 5 star guy, but he has a great game.

What we expect: We expect Jordan to see some playing time. It would be likely he’d see time on the kickoff team and other special teams duties. A year to sit and watch Zack Sanchez and the other corners will do him good. However, there is an open spot at corner, so you never know. He’ll get some reps either way, we believe

Tito is undersized. There’s no way to put it. He’ll have to work really hard to be an every down corner. Where he lacks in size, he makes up for his football IQ. He has a knack for the ball and will throw his body around like he’s the biggest guy on the field. He can’t do anything about his height, except pray he gets bigger, but what he can do, is figure out a way to get on the field. Whatever it takes. He’s fast and he’s aggressive. Those are two things you can’t teach.

What we expect: We expect Tito to redshirt. It wouldn’t surprise us if he ended up being a nickel corner and provide that extra body Mike Stoops defenses like. He can be that 5th moves to nickel, he’ll play later in his career. We don’t see him being out on an island every down, though. We love to be proven wrong in times like these.

Mr. Garnett possesses everything you hope for in a defensive lineman. He’s big, strong, quick and aggressive. Courtney was highly recruited and it came down to signing day for OU Nation to breathe a sigh of relief when his letter of intent was faxed to OU. The one thing I’ve noticed about him is he’s always smiling. Every single picture I’ve seen of him has been with a big smile on his face. Courtney is extremely talented on the football field, but also seems to be of high character off the field. This reminds us of someone else who’s been here before. See below.

What we expect: We expect Courtney to play right away. He may not get the starting nod, but we feel he’ll be in the rotation from day 1 in Norman. Courtney will bolster the front 4 of OU’s defense in big ways in the next 3-4 years.

Marcus is an underrated defensive back. He loves the game of football and will do nothing but get better in his time in Norman. Earlier this week, LJ Moore decided to transfer, creating even more of a void at the 2nd corner position. We are unsure if he’ll stick with playing corner, or if he will go a hybrid route and line up at safety as well. Marcus had a great high school career in Cedar Hill and we can see his instincts making him a player at Oklahoma as well.

What we expect: Marcus will most likely redshirt. If anything, he will see some time in mop up duty or on special teams. He’s a tall defensive back player, so his size will make him a front-runner if he’s in a battle with another vying player. Marcus will end up playing significant time at OU.

Vontre is big. He’s a huge corner, in fact. At 18 years old, he’s over 200 pounds and stands at least 6’1”. He’s already got the body. If his game comes around, he could play sooner than later. The one knock we’ve heard about him is he likes the big hit and has had times of difficulty wrapping up. This could be here say as we haven’t noticed it much on highlights. Bob Stoops said in his press conference that Vontre could be a key factor in defenses to come at OU. We kind of expect the same.

What we expect: We expect Vontre to be a safety for the Sooners. There will be a hole in at least 1 position at safety this fall, and Vontre could very well make a name for himself sooner that we all expect. There’s been a lot of true freshman line up in OU’s secondary, especially during Mike Stoops’ days.

Tay Evans has been talked about a ton in Norman this year. We feel one of the main reasons is the program he’s from. Allen boasts one of, if not THE best high school stadium in the country. If anyone is ever near Allen, Tx, go by and see it. It’s quite impressive. Tay is undersized, but makes up for it with his speed. He’s got a nose for the ball and will get there in a hurry. He’ll need to add a few pounds before he’s ready to star at linebacker, but he’s got the tools and pedigree necessary to get the job done. He’s one of those rare finds. If he were 220 pounds, he’d have handpicked where he wanted to go. A big kudos goes to OU for offering Tay a scholarship.

What we expect: Tay is one of those guys you want to root for and you want to see do well. He’s got the physical tools. Now we just want him to bulk up. Special teams is written all over Tay and maybe a few reps here and there on defense as well.

The lone JUCO transfer is Davante Bond. Devante is a freak of nature size wise. If you get a chance, go check out his highlights on YouTube. I realize he’s been playing down competition wise, but he’s made the most of it. He’s dominated offenses. He’s sacked the QB, he’s picked off passes, he’s defended the run. There’s not much he hasn’t done in 2 years at Sierra College. He has elite speed and makes the tackles violently. Devante has one of the more impressive highlights I’ve seen in a long time.

What we expect: If Devante catches on to the scheme of the defense, he’ll play right away. Imagine Eric Striker at 240. That’s what we see. I expect Devante to play these last 2 years and be drafted in the NFL following. He’s that guy.

Dwayne was a late addition. He went unnoticed by local schools, such as Alabama and Auburn. Dwayne has a great frame. He needs to learn to use it better, and then find a spot he wants to play. Is it DE or DL? That’ll be the burning question in Norman. He’s not quite fast enough to rush the passer every time, but he’s not quite strong enough to play in the trenches yet. He’s a project and could end up being pretty good if he gets it.

What we expect: We see a redshirt year for sure. He needs to get his body figured out and also figure out a spot to play on the defensive front.