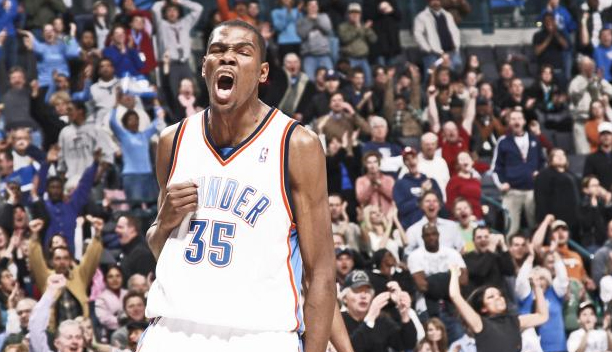 The Thunder are the hottest team in the Western conference right now and possibly the entire NBA.  Despite an uncharacteristic loss to the Wizards last week, the Thunder have jumped out to a 14-3 start and blown away even my high expectations.  I'll admit, when all of the NBA analysts and experts were picking the Thunder as pre-season favorites in the West, I became a bit nervous. I wondered how this young team would be able to live up to the hype and if they would really exceed last years Western Conference Finals appearance.  Thus far, I have been blown away.

The condensed season appears to definitely be favoring this young Thunder squad as their legs remain fresh deep into games even in back-to-back-to-back's.  What's even better?  The Thunder are taking care of most opponents early on allowing the starters to rest their legs for the majority of 4th quarters.  That is big when you consider the amount of physical demand placed on these players bodies playing games nearly every night of the week.

While it is still relatively early in the season, the Thunder appear to be on the fast track to finals so long as they don't let their early season success get to their heads.  The Wizards proved to the Thunder that they can't merely just show up and expect to win despite how terrible their opponents record reflects.  The Wizards had no business beating the Thunder and everyone knows it.  The Thunder are vastly talented while the Wizards are the league's bottom feeders with no real talent outside of John Wall.  The Thunder rolled into Washington with the leagues best record against a Wizards squad who had only won one game all year.  It is pretty evident that KD and crew were not motivated for this game and were running on auto-pilot.  Games like that can happen, they just can't happen on a frequent basis.

The lone bright spot in the Washington debacle?  None other than Mr. Russell Westbrook himself.  Westbrook has quite possibly outplayed Kevin Durant over the last couple of weeks.  Was the early season contract negotiations effecting his on-court play?  It's a legitimate question considering his incredible turn-around since signing his max deal and playing like a true all-star.  Don't get me wrong, Durant has played very well, but Westbrook is really starting to come on and has been one of the main reasons for the Thunder's success thus far.

Did I mention James Harden is also playing all-star caliber ball?  Last night he lit the Pistons up for 24 points going 5 for 6 from behind the arc and making it look easy. He's averaging nearly 17 points a game with 4 rebounds and 3 assists to boot.  He is essentially doing exactly what the Thunder needed out of him and leading the second unit with precision and determination.  The beard is in full effect and doesn't show any signs of slowing down.

Do the Thunder have what it takes to make a championship run this year?  Of course they do, but having all the talent in the world doesn't always equal a championship.  The Mavericks proved last year that hard work and dedication with a little bit of luck sprinkled in is the path to a championship.  The Thunder may not be crowned champions this year, but I wouldn't bet against them this season or the next five.

2 thoughts on “And The Thunder Rolls”