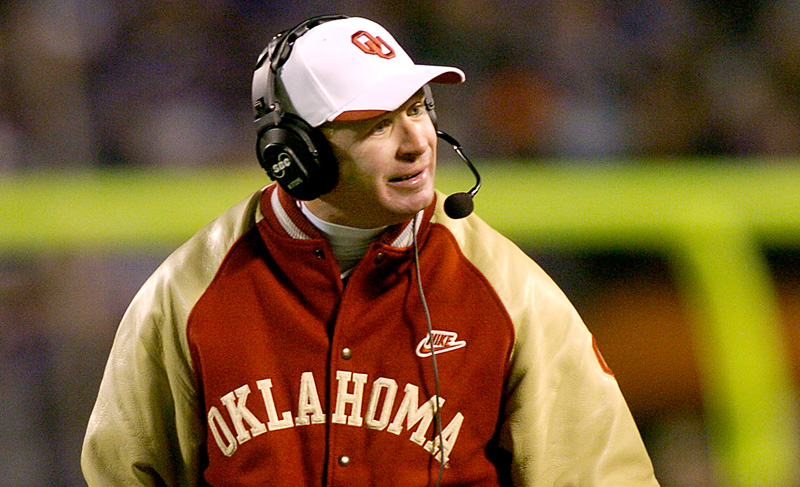 Multiple reports are now indicating what Sooner nation has been hoping for the past month, that former Oklahoma defensive coordinator Mike Stoops is set to return.  The younger Stoops spent 8 years as the Arizona head coach after being relieved of his duties earlier this season.  What was thought to be a hot commodity on the assistant coaches block, Stoops has instead chosen to reunite with big brother Bob in hopes of recreating the wild success they had early in the 2000's.

I, for one, could not be happier.

I think that the Sooner defense has simply not been the same since Mike left back in 2003.  Since that time the Sooner defense has looked lazy and complacent.  Not only has the defense looked complacent, but even brother Bob has looked a little too comfy in his shoes for the last few years.  Bob won a national championship in only his second year as a head coach and has been to 3 other national title games since.  Having that kind of success so early on in one's head coaching career could easily lead to complacency.  I think Bob had so much success that once his brother, Mike, moved on that there was no one in the club house to really call Bob out and let him know when he was slacking.  Mike Stoops brings that fire back to the Sooner locker room that they have so desperately missed and you can bet that Mike won't think twice about keeping Bob accountable and inspired.

How exactly does Bob make room for brother Mike to rejoin the Sooner staff?  Well, for starters, defensive coordinator Brent Venables has publicly stated he is on board with sharing the defensive duties with Mike Stoops once again.  That would leave Willie Martinez, Oklahoma's current secondary coach, as the odd man out.  It has been reported that Martinez is in talks with a number of other programs to take over as their defensive coordinator.  This would allow Bob to keep in line with his history of not firing assistant coaches and allow the man that Sooner nation has dearly missed over the last 8 years return to the program.

While I don't anticipate Mike Stoops rejoining the program and turning it into an Alabama or LSU defense overnight, I do foresee a change in mentality and attitude on the defensive side of the ball that only Mike can bring.  Mike Stoops has been known to let his emotions fly on the sidelines and you'd better believe that his players react to that.

In short, we will now no longer have Venables as the scapegoat for our defensive woes in the recent years.  We will now have a man fully capable back in charge and no excuses not to turn things around.  Mike Stoops is back in town boys and girls and I couldn't be happier.