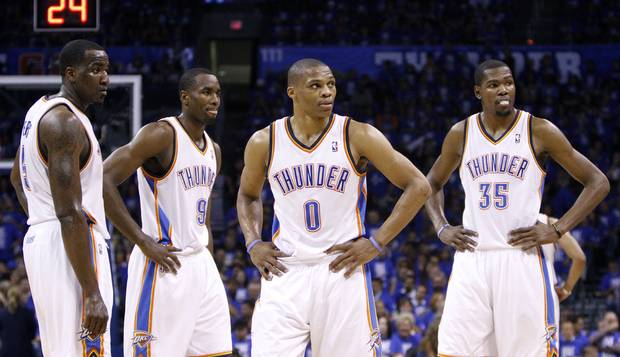 With the return of Russell Westbrook looming and the Thunder currently sitting atop the NBA standings with a record of 43-12, let's rank their biggest roadblocks in the Western Conference en route back to the NBA finals.

The Grizzlies notoriously bounced the Thunder from the 2013 playoffs not long after Westbrook went down with his original injured knee. Despite every game being close, the Grizz "easily" knocked out OKC in five games. The Thunder are currently 2-1 in the season series vs Memphis, with the sole loss coming in an ugly 90-87 defeat in mid-January. Of course, if the playoffs were to start today then the Grizzlies would be on the outside looking in as they are currently a couple games back from the eight seed. It's not inconceivable to imagine the Grizzlies finding their way into the eight seed and taking on the Thunder in the first round of the playoffs. While the Thunder would still be the heavy favorites, the Grizzlies would be anything but an easy out in the first round.

While the Rockets currently occupy the third seed in the West, I don't anticipate them finishing that high. Despite the off-season acquisition of Dwight Howard and all the hoopla surrounding Harden and Howard supposedly dominating the league for years to come, the results thus far have been under-whelming. At 36-17, the Rockets are obviously not a team to take for granted, but count me amongst the bunch who think of Howard as more of a team cancer than savior. The Thunder have handled the Rockets in each of their two regular season match-ups thus far and I don't see them poising much of a threat to Oklahoma City this year.

Golden State just might be the most dangerous team on this list. While they are a wildly streaky team, when they are on, they are on. The lethal sharp-shooting combination of Steph Curry and Klay Thompson is likely one of the best pure shooting duo's in the league. Not to mention the issues the Thunder have had trying to slow down the Warriors in their three meetings this season. Despite ranking as one of the top defensive teams in the league, the Thunder have given up 116, 112, and 121 points to the Warriors in their three contests. Somehow OKC managed to win two of those games anyway, but none of them came easy. The Warriors will likely enter the playoffs as one of the finals seeds, but will be a dangerous squad to any team they face.

Portland has been a bit of a surprise team in the West this season. They are the only team in the league to hold multiple victories over the Thunder. Early on in the season it appeared as though the Blazers simply had OKC's number after consecutive victories. The Thunder bounced back to even up the regular series 2-2 winning their last two encounters to put a wrench in that theory. Portland currently occupies the fifth seed in the West and have cooled off a bit since their hot start, but still remain a talented bunch with lots of depth. Look for the Trailblazers to finish as one of the top four seeds in the West by the end of the regular season.

The Lakers are no longer the premiere club in LA. Boy does that feel awkward to say. While the Lakers sit tied for last place in the conference, the Clippers currently sit in fourth place with a record of 37-18. The Thunder and Clippers have faced off only twice thus far with each team holding court at home. The Clippers are one of the few teams who posses a superior player at the point guard position in all-star Chris Paul. With Blake Griffin improving each year and the franchise committed to bringing in endless amounts of role players, they pose a serious threat in the Western Conference.

Despite being declared "old" years ago, the core of the Spurs have kept this franchise at the top for over a decade. A day will come when Duncan, Parker, and Ginobili will fade off into the sunset of Spurs lore, but they don't seem quite ready yet. The sting of blowing the NBA finals in game six last season likely still remains at the forefront of their minds and they are no doubt set out for redemption. The Spurs and Thunder have faced off three times thus far with the Thunder taking all three contests. Make no mistake about it though, the seasoned Spurs remain the Thunder's biggest roadblock back to the finals.

2 thoughts on “Biggest Competition in the West for OKC”