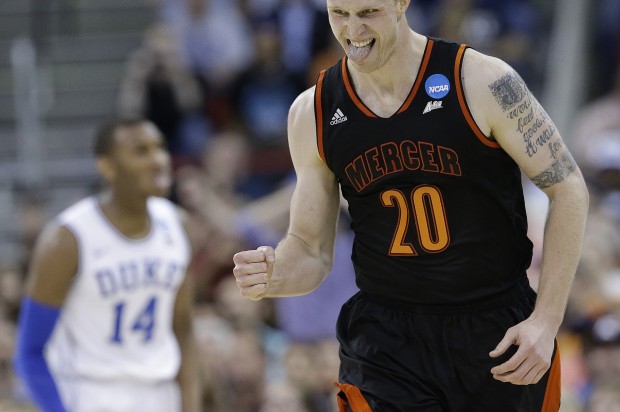 Every year the NCAA Tournament gives us these seemingly impossible match ups. David verses Goliath. Mercer verses Duke. Harvard verses Cincinnati. No one picks David, not even Toby the Bear (Mercer's mascot). And every year they shock the world! Last year the aptly named Shockers of Wichita State let us ride their Cinderella carriage all the way to the Final Four. This year we have four teams bidding for the spot of the 2014 NCAA Tournament Cinderella Story.

Who do I think this years Florida Gulf Coast will be? You guessed it. The team from the very same conference. Mercer!

Taking on the NCAA basketball perennial power house that is Duke, I surely didn't give the Bears a second thought when filling out my bracket. But did you know that this is the second time in three years that the Blue Devils have been bounced in the first round by a double-digit seed? I guarantee you Mercer did. The Bears jumped on the opportunity by scoring 20 of the final 25 points of the game. Let's get to know our front-runner for the Cinderella title a little bit better though.

Winners of the Atlantic Sun Conference, as previously stated the same conference that brought us Florida Gulf Coast last year, Mercer boasts a starting roster of five savvy seniors. In fact, seven of their nine man rotation are seniors.

The Mercer Bears rank in the top 25 in the nation in points scored per game as well as top 10 in assists per game. They're led by their 6'4" guard, Langston Hall, who averages a career high 14.7 PPG and 5.7 APG. Along side Hall is their 6'10" enforcer inside, Daniel Coursey, who pulls in almost 7 RBP, averages nearly 10 PPG and sends back 2.2 BPG.

There's something to be said about a team with a solid group of seniors in the "one-and-done" age. Mercer is no stranger to the big game stage either as they upset Mississippi earlier this year and nearly knocked off Texas. Talk about a rematch if those two met in the Sweet 16!

The question from here will be: Can the Mercer Bears keep it rolling?

Their road to the Final Four doesn't look quite as daunting as others such as Dayton (potentially having to face Syracuse, Kansas and Florida) or Harvard (Mich St, Virginia and Villanova). But if anyone can do it, I'd put my money on the only team that started five seniors all year long.

Come on Mercer, we're all rooting for you!