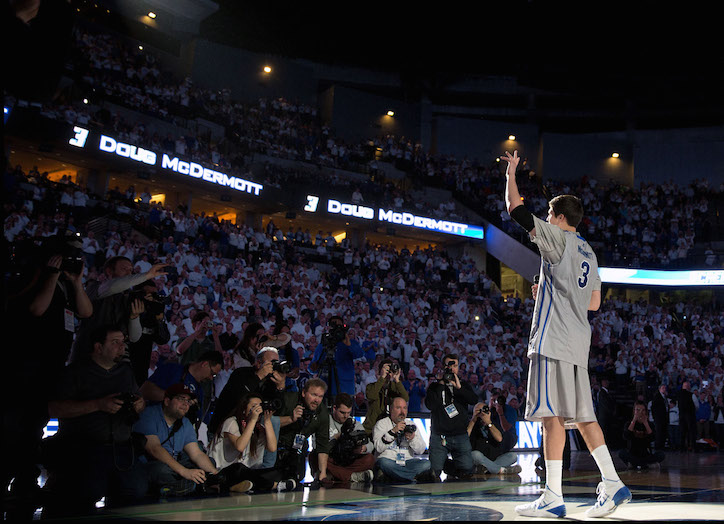 Doug McDermott, aka McBuckets, is the best college basketball player of our generation. Hands down.

Please, tell me, who else had a better college career in the last decade? I'll tell you who, no one!  Not who's the most flashy, athletic, thrilling or sexy player. But who's the best? If you disagree, that's fine. But you're wrong. Leave a comment if you want, but here's my argument for McDermott.

Not only was Doug one of the greatest talents we've ever seen, but he did things the right way too. He played the game with equal parts intensity and integrity. Yet most people won't appreciate what Doug has accomplished in his four years at Creighton because he didn't play for a major college program or win an NCAA championship.

But the 3-time All-American and likely player of the year doesn't need the recognition. His stats speak for themselves. McDermott ranks as the fifth highest scorer of all time in college basketball. Only one other player in the last decade ranks in the top 25 of that list (Tyler Hansbrough at 13). Doug passed various legends on the all time scoring list such as Oscar Robertson, Larry Bird and Elvin Hayes. In his four years at Creighton he averaged 22 points per game, with an average FG percentage of 55 and a 3-point percent average of 45.7! Those are some amazing, incredible, gaudy numbers!

To top that off, McDermott has scored at least 800 points each of the last three seasons. Why is that important you ask? Oh just because no one has done that since Wayman Tisdale in 1985 at Oklahoma. "Big deal," you might scoff. Yes, it is a big deal! Other people who have done that include some of the legends I mentioned before: Larry Bird, Oscar Robertson and Pete Maravich.

It's not just about the amount of points scored though. It's also the quality of opponents and strength of schedule. Creighton didn't go out and schedule weak sister competition, but played top notch competition. McDermott wasn't just beating up on D2 schools, but in 2013-14, a season in which Doug had a career high 26.7 PPG, Creighton had the 10th best RPI in the nation!

Are you starting to understand now why I believe he's the best college basketball player we've seen in 20 years?

In an era where most kids jet for the NBA after their first year, Doug took a different route. He enjoyed his time in college and even though he never won a championship, he still said in his press conference after his final game, "I hope more kids do what I do."

McBuckets is a solidified college basketball legend. He set an example on how you play the game not only hard, but fair. In his final game against Baylor, in the waning moments of the game when they were down big with absolutely no hope of coming back, McDermott displayed his class and character one final time. When his teammate shoved Baylor's Corey Jefferson to the ground out of frustration, who was the first to rush over to help him up? None other than McBuckets himself. He didn't have to, but that's just who Doug McDermott is. If you googled "class act," Doug's picture would pop up.

Doug will most likely be selected in the first round of the upcoming NBA draft and no matter what his NBA career looks like, he will always live on as a college basketball legend.

So long Doug, thanks for the memories and example!