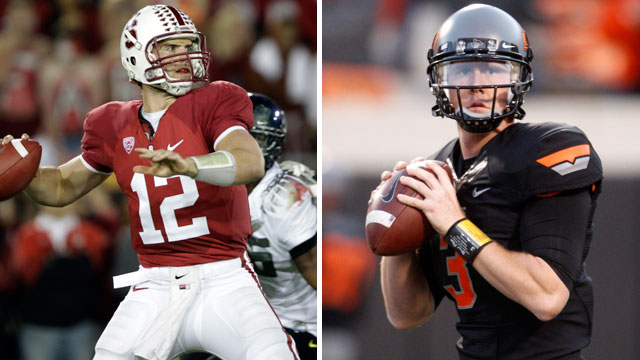 Tonight is the night. Oklahoma State can officially stake it's claim as a BCS champion with a win over Andrew Luck and the Stanford Cardinal. In this post, I will dissect some things OSU fans probably won't want or expect to happen as the game unfolds.

There is a name no one mentions when breaking this game down. Stepfan Taylor, Stanford's 5-11, 208lb bruising running back. One thing people forget about Stanford is they are run first, pass second. They just happen to have arguably college football's most accurate and dangerous passer once they set up the opposition for the pass. Taylor is a junior from Mansfield, Texas. He is in his second straight season of over 1,000 yards. He lines up behind sometimes three lead blockers and will "nickel and dime" you to death, only to have a play-action pass called where Luck loves to hit his tight ends down the middle. Taylor is the featured back, but Stanford will use 2 to 3 backs during the game to ensure fresh legs. One thing Oklahoma State has not done well is defend the run. Stanford has a great offensive line and uses it to it's advantage. If you're an Oklahoma State fan, Taylor and committee should have you as worried, if not more than Luck.

On the other side, Joseph Randle and Jeremy Smith will be ready for the challenge to run it right back at Stanford. Randle's elusiveness and Smith's power will provide plenty of mismatches on Stanford's defensive side of the ball, only to set up the pass where Weeden will undoubtedly have his eyes locked on Justin Blackmon the majority of the game. Stanford hasn't faced a receiver all year like Blackmon, with maybe the small exception to Robert Woods from USC, who torched Stanford early in the year. The Cowboys need to use the tight ends in this game and continually move the ball. Turnovers aren't an option, because I just can't see the Pokes forcing The Cardinal to punt the ball that much.

Luck and Weeden's "Swan Song's" will provide a lot of emotion as both of these quarterbacks have so much passion for what they do and where they play their college football. The similarities are almost scary between these two teams. Great quarterbacks, great running backs, great coaching and sidelines full of winners.

I'm probably most excited about THIS game than any game in the entire bowl season. Most people expect a high scoring, shootout. I don't completely disagree with that, but I think Stanford's ground and pound game will use a lot of the clock. This is shaped up to be an instant classic. I just hope both teams play well and leave nothing to chance on the field.

In the end, we expect fireworks, but not as many as most think:
TCS Score Prediction: