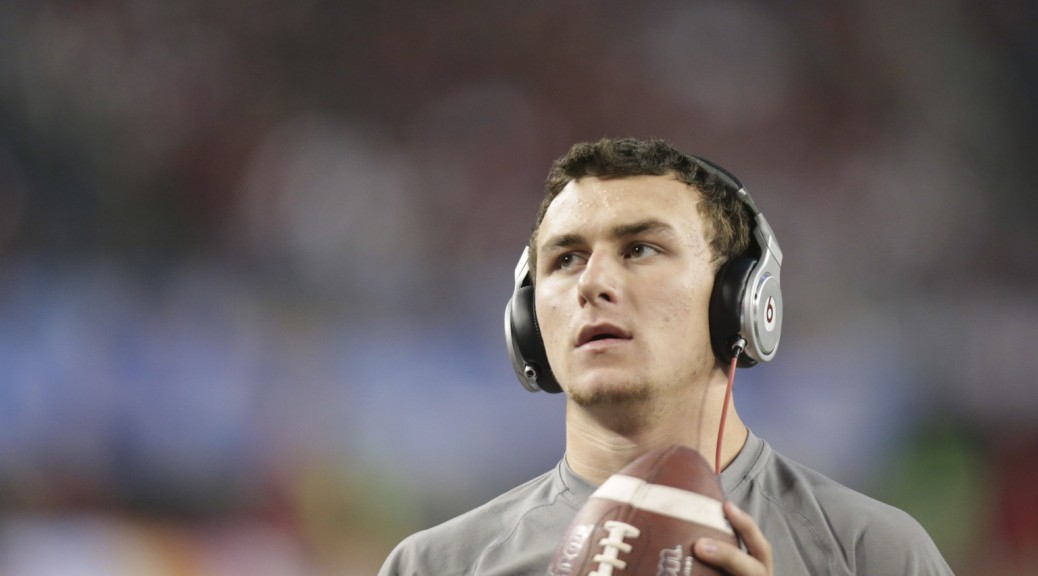 flash in the pan

Let's talk football, Johnny Football. Few figures in sports are as polarizing as Johnny Manziel. You either hate him or you love him. Some "experts" say he's a sure fire top-10 pick, others say they wouldn't touch him with a 10-foot pole.

You want my pseudo-expert opinion? Well you're gonna get it anyways. Say what you want, but Manziel has peaked. And if he goes in the first round, he's going to be a bust!

Pro day, schmo-day. Those things don't matter nearly as much as the media makes them out to be. Yes, we all love the 24/7 coverage on all things football, but pro days are not that important! Do they matter? Sure. But a great pro day doesn't equate to a great NFL career. Mike Mayock, NFL network draft guru, proved this when he said, "The best pro day I've ever seen is JaMarcus Russell." Do I need to remind my readers how Russell's career turned out? (Just google "draft bust") So let's take it down a notch on Manziel's hip-hop flavored pro day and talk about things that actually matter.

Houston's not going to take him and Cleveland didn't even go to his pro day. Oakland is the only team I can think of who would be crazy enough to possibly roll the dice on him. However, after their aforementioned bust of a pick used on Russell in 2007, I would understand if they were more than hesitant. Not to mention the Raiders recently signed Matt Schaub and even though Schaub is likely not the long term solution in Oakland, I'm going to go ahead and list them as a long shot.

Here's the deal, Manziel was an amazing college player. There's no denying it. He was as electrifying a player as we've seen in years. But so was 2001 Heisman winner and fellow scrambling QB, Eric Crouch. You don't remember him? That's because he got drafted as a wide-receiver and then retired before he ever saw a single snap. The guy was an incredible college quarterback, but that doesn't always translate to the NFL.

Maybe you write off Crouch as an anomaly. What do you do with Vince Young then? Vince dazzled college football for years and led his Longhorns past USC for a national championship. Then he went to the pro's and, well, you know the rest of the story. Didn't he file for bankruptcy recently? Ok, that was a cheap shot. But really, Vince is a prime example for what NFL teams are going to get with Manziel. And let's not forget that Vince had the size of a prototypical professional QB that Johnny will never have.

Need I continue with big name college quarterbacks who fizzled out in the pros? Yes? Ok, you brought this one on yourself. Tim Tebow ring a bell? Yet another SEC, national champion, Heisman winning scrambling QB who did what in the pros? Half a season starting for Denver, then even after winning a playoff game was promptly traded. "Why? He won a playoff game!" you might wonder. The Broncos didn't win because of Tebow, but in spite of Tebow. Obviously the Peyton Manning signing had a little something to do with the Broncos dumping Tebow, but the fact that he couldn't even unseat Mark Sanchez and barely saw the field before his eventual release only further proves my point. Owner's know it, coaches know it, and scouts know it, but enough about Tebow.

Let me just go ahead and take the wind out of your sails. At this point you may be thinking, "Yea, but Caleb, Russell Wilson just won the Super Bowl! Wilson and Manziel are basically the same player. Booyah! In yo face!" Woah, easy killer. Let's get one thing straight, Johnny Manziel is not Russell Wilson. Not even close. Wilson is a humble leader, plays with integrity and doesn't make mistakes. Not to mention that he's on a team with a crazy good ground game and the best defense the league has seen in years. So before you start hurling the Russell Wilson comparisons at me, just think about it for a second.

All I'm saying is that if you watch Johnny Football, and you're not an A&M graduate, you know exactly why he won't make it in the NFL. His unorthodox style is fine and dandy when you can out run most everyone on the defense, but you take that into the league where defensive lineman run 4.4's and you don't have any pocket awareness, see how long you make it. I'm not saying that mobile QB's can't be successful in the NFL, but Johnny Football is a hyper-mobile QB. One that relies on "chaos" and luck to achieve what he's done.

Anyone else watch the A&M/LSU game? When Manziel faced a really good defense, all of the sudden the Hoodini act was strangled.

And let's not forget the kid is a walking PR nightmare off the field. Do you really believe that he's "changed" and left those ways behind him in college? I ain't buying it. Let's not kid ourselves, the guy has some major character issues. You want to blame it on him just "being a kid," give me a break man! When you step into the role of the starting quarterback of a national program like A&M, then you become the first freshman to ever win the Heisman trophy, whether you want to or not, you are handed a great deal of responsibility. If you shirk that responsibility and can't handle it in college, why would I believe that all of the sudden you can handle it in the pro's?

Chances are, though, that Johnny Manziel will get drafted early. Maybe even top 10. He'll fool some NFL organization or some owner will get swept up in the Johnny Football hype, blinded by all of the potential money to be made from jersey sales. But there is absolutely no chance that he will have a successful career in the NFL. No chance! Soon we will be lumping Johnny into the same conversations we have about Jamarcus Russell, Vince Young and Tim Tebow.

Yes, I know Johnny feeds on all of the negativity, he says it "drives him." Well, I hope he reads this because he's going to need all the help he can get to make it in the NFL.

4 thoughts on “Flash in the Pan: The Johnny Manziel Story”