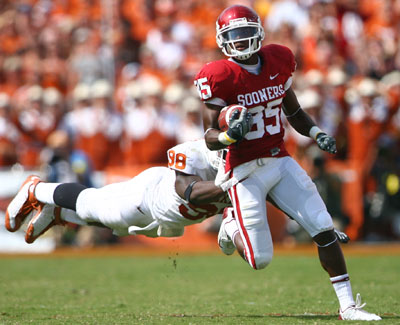 Let's get one thing out of the way, the Sooners' loss to Texas Tech this year ranks up in the top 5 losses of all time in the programs storied history.  A team that was preseason ranked #1 and held a 39 game home winning streak let an un-ranked Red Raiders team come into Norman and flat out embarrass them.  It was the second straight week of flat play from the Sooners after a dominating victory at the Cotton Bowl.  The blame game can be played all day long on who is at fault for the loss, but I want to move past this.  I want to focus on the rest of the season and what the future may hold.

The Sooners went into Manhattan, Kansas this past week and showed that they still have a little something left to prove this year and will not be coasting this one out.  After the Wildcats sustained the run early on, Brent Venables adapted the defense and began stacking the box and getting to the quarterback.  Put in 3rd and long over and over, the Wildcats were in unfamiliar territory and folded their tents with no real threat of a passing attack.

So what does all of this mean?  With a few more breaks the Sooners could find themselves right back in the National Championship game.  With a dominating win over then unbeaten Kansas State, the Sooners find themselves back in good graces with the BCS and ranked the highest of all 1-loss teams (#6).  With #1 LSU set to take on #2 Alabama this weekend, one of the two is bound to drop below the Sooners and with the #3 ranked Cowboys still on the schedule all the Sooners really need is a Stanford loss.  They would obviously need to win their remaining games, but if so, the good Lord may shine down his mercies on them and forgive an unforgivable loss to the Red Raiders.  Even with an undefeated Boise State in the way, the Sooners should be able to jump them with a win over then #2 ranked OSU in Stillwater.  And I don't want to hear any arguments about an SEC rematch in the title game, that's not happening.

Now that is a lot of "ifs" left in the way and the most important one is the Bedlam showdown in Stillwater on December 3rd.  If the Sooners can't foil the high powered Cowboys, then all of the above points are moot and we will be sitting back watching the Pokes try for their first ever National Championship.  But come on, I think we all know that ain't happening.