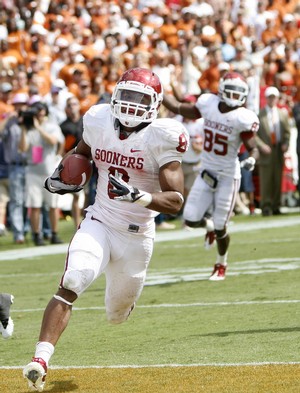 Here we are on the eve of a Sooners bye week with 3 games left on the schedule and a banged up Sooners squad that has it's work cut out for them.

It's no secret that the Sooners have lost 2 of their premier play-makers for the remainder of the season in Ryan Broyles and breakout star Dominique Whaley.  Broyles had recently set the all time Division 1 record for career receptions while Whaley burst on to the scene this year leading the Sooners in all major rushing categories and establishing himself as the clear cut starter in a once crowded Sooner backfield.  While Whaley will get a chance to return next year, this is it for Broyles and it was tough to watch him go down before the season concluded.  I do wonder if the Sooners will be able to recover from losing their starting RB and star WR with a showdown in Stillwater on the horizon.

Sophomores Roy Finch and Kenny Stills will be cast into the spotlight and be expected to carry the load where their now injured counterparts once did.  Finch was widely believed to be the starter coming into this season as he stole carries from DeMarco Murray last year (who is now setting franchise records for the Dallas Cowboys).  It was not to be though as Whaley stole the spotlight and dominated while Finch saw minimal carries early on.  With Whaley out, Finch has been thrust back into the starting position and has had flashes of greatness once again, but will he be able to carry the load like Whaley against a determined Cowboys team in December?

Meanwhile, Kenny Stills has played a nice compliment to Ryan Broyles all season long stretching the outside of the field and opening up holes in the middle for Broyles.  With Broyles no longer slotted in the middle we are going to need to see continued improvements from the one handed wonder known as Jaz Reynolds who has been developing quite nice as of late.

Still, the losses of Broyles and Whaley cannot be overstated and brings heavy concerns to this team with the daunting task of going into Bedlam back to back years and knocking off the Pokes in their own backyard.

The sad reality is that even with a win, the Sooners may not be able to jump the Crimson Tide as Bama lost in a perfect storm overtime game to LSU this past weekend and dropped only one spot down to #3 in the BCS rankings and still ahead of unbeatens Stanford and Boise State.  I would like to think that with a win over the #2 ranked Cowboys in Stillwater for the Big 12 Championship that the Sooners would leap-frog the Tide and into a national championship game with LSU, but I'm beginning to wonder if the voters have even more of a love affair with the SEC than I could have ever dreamed.  There are still games to be played and anything can happen, but the Sooners have a long road ahead of them and will need quite a few chips to fall into place if they plan on having any shot at #8 this year.