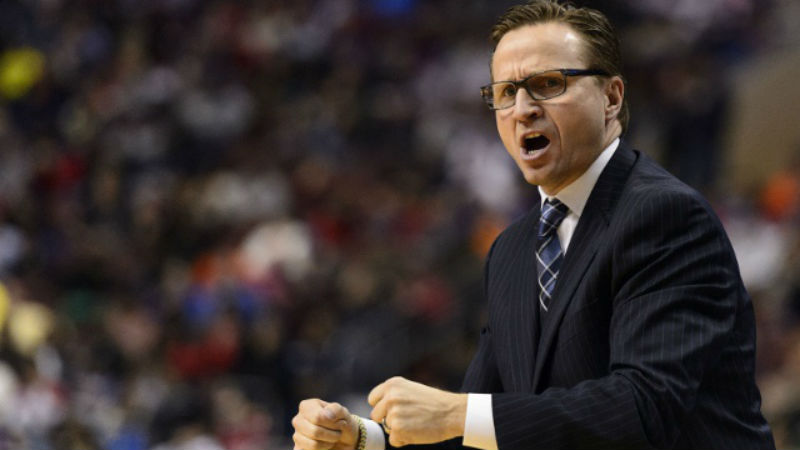 After game five against the Memphis Grizzlies in the first round of the 2014 NBA playoffs, I began preparing for a scathing article demanding Scott Brooks be fired. The Thunder had fallen down 3-2 to the seventh seeded Grizzlies and I was convinced that Brooks was to blame. I was ready to rip him to shreds and pray that Presti would agree that it was time for a change.

Then the Thunder bounced back and destroyed the Grizzlies in games six and seven to advance to the second round. Was Brooks now off the hook? Well, it's a little more complicated than that.

How could you justify firing a coach that improved his teams winning percentage every single year over the course of his first five seasons in the league? Coming off a finals appearance in 2012, Presti traded away budding star James Harden after failed contract negotiations and all the critics condemned the Thunder organization on the move claiming they would be unable to replicate their success without the sixth man of the year. How did Brooks and the Thunder respond? By improving their win percentage yet again in the 2013 season, even without Harden.

The team was primed for another title run when Westbrook went down in the opening round of the playoffs and the rest is history. With all the back-story out of the way, what does this have to do with Scott Brooks' job?

Well, by looking at the numbers alone, it would appear he's done a fantastic job. That is, until you really begin to look deep and see beyond the numbers on the surface.

Here's the deal, Brooks has the reigning MVP as well as a consensus top 10 player running the point. Has Brooks really done a great job of coaching or have Durant and Westbrook simply been good enough to overcome his coaching deficiencies and win games despite his errors? It's hard to say for certain, but I've tended to lean towards the latter in recent weeks.

One of my biggest complaints is Brooks lack of any sort of semblance of a structured offense. He has simply given to the keys to KD and Westbrook and allowed their brilliant basketball IQ and creativity to flourish into whatever they come up with on the fly. And you know what? The majority of the time it works. The all-star duo play as if they are running the courts during a summer Goodman League game and that's not all as bad as it sounds, but the deficiencies of this game plan really come to the surface during crunch time. With the game on the line and coming out of a time out, you'd expect Brooks to have drawn up his best play. What happens more times than not? You know the drill by now. A forced pass in to Durant, no matter how many defenders draped on him, and a 30-foot prayer heaved up. That's excusable once or twice, but when it happens time and time again, you begin to question if Scott Brooks is really anything more than a cheerleader in a suit walking the sideline.

Durant's freakish athletic talents allow him to take those absurd shots and make them at a higher frequency than most, but that only covers up the real underlying problems. There is no ball movement in the offense. There is no motion. There are very few set plays. Role players jog down the court then sit and watch from the three-point line. They've gotten away with it for so long with increasing levels of success that it's too far gone now for Brooks to change even if he wanted to. Brooks lost the keys to the team and he can't just take them back. He gambled on Durant and Westbrook being able to create their own offense and trust it would be enough. Again, looking at the levels of increased success each season, it's hard to argue with Brooks' train of thought. The problem is, that's not really coaching. That is simply stumbling into the good fortune of having one of the most talented rosters in the league and hoping they can figure it out on their own.

I don't think Brooks is the worst coach in the league by any means. Heck, Erik Spoelstra has won back to back NBA titles and I don't think anyone really believes he does much more than sit back and let LeBron be LeBron. The problem is, the Thunder have the potential to be so much better. With the talent OKC has, you'd have to imagine that coaches would be lining up to interview for the job if it were to come open. Brooks stumbled into a gold-mine as a rookie coach and done the best he's known how, but I just can't ignore the feeling that they are still under-performing with him at the helm. Call me a spoiled fan or whatever you'd like, but with the talent and youth at Brooks' disposal, the Thunder should be piling up the rings.

Would it be fair to can Brooks at this point with his body of work? No, I don't think it would be fair. But life's not fair and the National Basketball Association is a cruel business. I wonder how long Presti will allow Brooks to remain the head coach when I think it's clear he's taken them as far as he can. Brooks reminds me of a young Doug Collins in the late '80s coaching the Chicago Bulls during his first run as an NBA head coach. Collins had a young Michael Jordan and Scottie Pippen that dominated the regular season during his three-year run, but never could seem to overcome the Pistons once the playoffs rolled around. A roster loaded with talent, but in need of an elite coach to truly get them over the hump. If only Presti could deliver one final magic trick and find the next Phil Jackson. Who knows how those Bulls teams of the '90s would've done under the leadership of Doug Collins. Would Jordan and Pippen's prime years have been spent dominating the regular season, but continuing to come up just short in the playoffs?