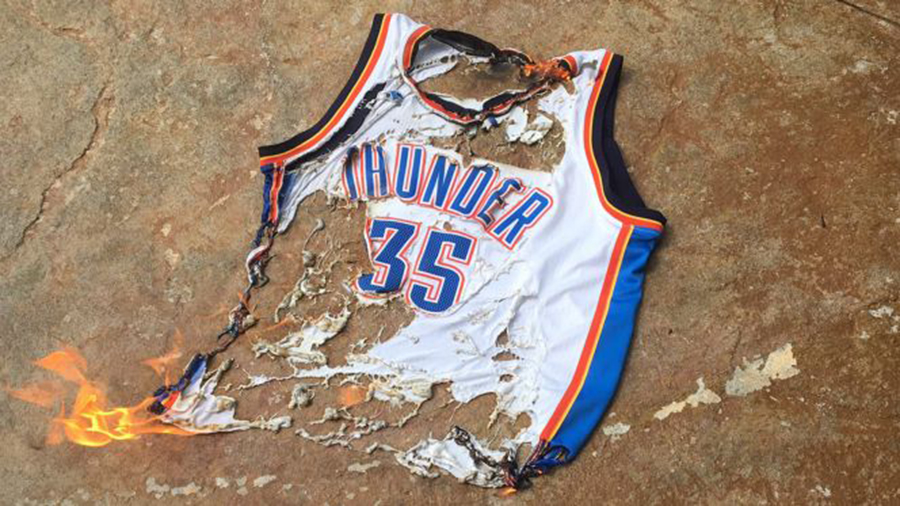 Kevin Durant was the face of the franchise. He was the face of Oklahoma City and, by extension, the state of Oklahoma. This was his team. These were his guys. This was his time to bring a title to OKC. The cards were dealt and he was sitting in the drivers seat primed for a legit title run in 2017. Even Al Horford was ready to come join the Thunder train. All KD had to do was say "yes."

But he didn't. He took the coward's way out. Let's not drag this out until the end, ok? Kevin Durant is an Oklahoma villain for now and for all time. ALL. TIME.

This move by Kevin Durant I cannot understand. He had it all in Oklahoma City. He had what most would agree as another top five player already on the roster. He had a brand new coach brought in just for him who took them to within a game of the NBA finals. He had a general manager who was not content to sit on that very same lineup, but went out and finally got that reliable shooting guard they had so desperately been needing. Presti was yet still not content and went out recruiting Al Horford trying to put together a team that could have competed for NBA titles for years to come. All built around Kevin Durant and all he had to do was say yes.

Which is what makes this decision even more confusing to me. Saying yes, even if just for a one year deal, was the easy answer. No one would've killed him over it and he was already established and beloved in OKC. They had a stellar roster and a legit shot at an immediate NBA title. After all, these were his running mates. This was the franchise he'd helped build from the ground up. Golden State was the new hated rivals who just came between you and an NBA title. Why on earth would you want to run and jump into their arms? That's not what a superstar does. That's not what a true competitor does. A real competitor would have been furious at how the season ended and vowed to come back even stronger next season.

Make no mistake, this is not Kevin Durant running to California to form a brand new powerhouse. This is Kevin Durant running to California to join the very team who just set the all time regular season wins record. This is not Kevin Durant's team. He did not build this and they do not need him to win. This is the move of an end of the bench role player looking to jump on the bandwagon to try and get an easy ring. This is not the fierce competitor we were lead to believe. This is giving up on your team and city. This is throwing in the towel right on the threshold of something great. This is not a man deserving of our praise.

Kevin Durant took the easy way out. There were realistically only four teams with a legitimate shot an immediate NBA title. Durant leaving the Thunder shrunk that number down to three. And so what if he does go win a title or two out west? He didn't do it with his guys. He didn't even do it as the top dog on his own "team." What happened to that "I'm tired of being second" mantra? Last time I checked, Steph Curry was the two time reigning league MVP. Seems like you're good with being the second best player on your own team now.

Is this what the NBA has come to? Sacrifice everything you've built and sworn as your home just for a tiny bump in odds of winning a ring? If so, then it is shameful and Kevin Durant deserves every bit of backlash that has come his way. He knew this would not be a popular decision, yet he was still not deterred. The chance at an easy NBA title was too appealing. I mean, who would want to go into the offseason and work extra hard to come back and conquer your western conference foe when you could simply just go join them? That is the path of least resistance and that is why I no longer respect Kevin Durant.

Enjoy your time out in California, KD. You were on the verge of all time greatness then you went and blew it. Have fun being second.