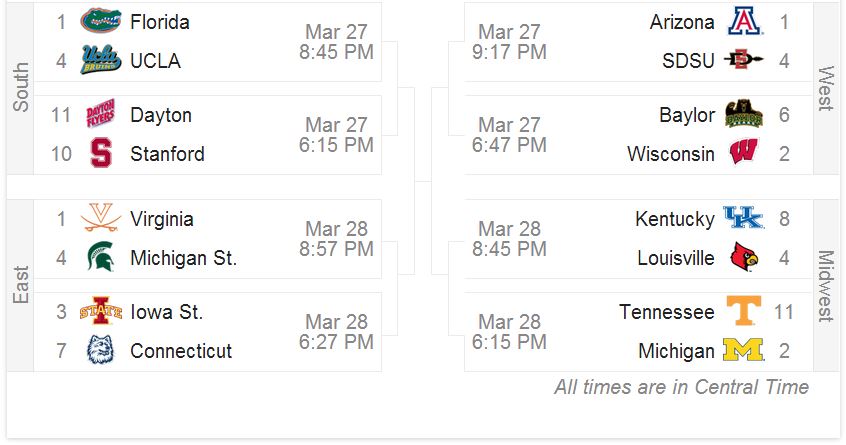 The flurry may be over, but the madness continues.

The field of 64 teams has been reduced to 16 and most of our brackets are up in flames. Maybe you're like my dad and stopped watching/caring after the first day (FIRST DAY!). Or, if you're like me, you've been glued to your television and iPhone constantly checking your bracket no matter how bad it looks. And trust me, it looks bad.

The story of the first two rounds? Early upsets. Three of the four 5 vs 12 seeds went in the favor of the 12 seed. Duke, a 3 seed went down to 14 seed Mercer, 6 seed U Mass lost to 11 seed Tennessee, and 11 seed Dayton knocked off Ohio State and Syracuse! Has there been a year with more early upsets? I can't think of one.

Even with the early barrage of upsets in the first round, three of the four 1 seeds are still in play. In the first round we experienced the madness with early upsets as 7 double-digit seeds won their opening games. Since then only three of those teams are left, with two playing each other (Dayton vs Stanford).

What will the story be for the Sweet 16? Who will emerge victorious? Can Dayton continue their Cinderella story? Let's see if I can't help break down some of the big time match ups. And as always, I'll make a BOLD/maybe dumb prediction.

1 Virginia vs 4 Michigan State
The sweetheart of the experts, Michigan State, takes on their first big challenge facing the number 1 seed in their bracket, Virginia. So far Michigan State's road to the Sweet 16 hasn't been the most daunting, but could that play to their favor? Having played two games that weren't as emotionally taxing, maybe Michigan State is primed for a big game. Virginia, on the other hand, faced a quality opponent in the second round and handled Memphis with ease. The Cavaliers have looked very impressive so far and this is set to be a blockbuster game pitting the Big 10 champs vs the ACC Champs. I see this one coming down to the wire. Look for the stifling defense of Virginia, which ranks number one in the nation, to set the tone for this game. I see a low scoring affair with Virginia coming out on top, possibly even in overtime.

4 Louisville vs 8 Kentucky
I think this is one of the most intriguing matchups we've had all tournament. Reigning champs, Louisville, take on the Jekyll and Hyde Wildcats of Kentucky. No team this season has received as much attention or media scrutiny as Kentucky has. And for good reason! When you start five highly touted freshman and have the reputation of sending almost all of your starters to the NBA each of the recent years, I think you've earned the right to be scrutinized when things don't go the way you'd hoped. On the other hand there's Louisville, led by Rick Petino, that has been one of the most consistent teams all year. Do you go with the consistent Cardinals or the wild card Wildcats? Do you roll the dice or play it safe? I'm playing it safe. Despite getting hot at the right time, Kentucky's run ends here. If Louisville can get past Kentucky then they may have an outside chance of going back-to-back this year. I'm picking Louisville.

1 Florida vs 4 UCLA
I've been particularly hard on Florida thus far in the tournament. Maybe they heard I went against them in my bold prediction last week, fueling them past Pitt (you don't think Billy Donovan reads The Crimson Slate, do you?). They've proved me wrong and I think it's time to jump on the Gator wagon. UCLA has been impressive in the first two rounds, but all they've seen so far is Tulsa and Stephen F. Austin. Not quite a good preparation for the number one overall seed in the tournament. Defense wins again here and Florida is as good as they come on defense.

10 Stanford vs 11 Dayton
Ah yes, the age old classic matchup of the 10 vs 12… what? Wait. Stanford and Dayton? Did anyone have this matchup in their bracket? If so, please hit me up on Twitter because I could use some mentoring in bracket selection. My guess is this matchup has provided at least a little red on each of our brackets. None the less, this matchup will provide us with at least one double-digit seed in the Elite 8. And because I'm a sucker for glass slippers, I'm going Dayton here. Keep the dream alive Flyers!

2 Wisconson vs 6 Baylor
This is going to be a fun game to watch. Baylor is red hot and catching stride at the right time, but so is Wisconsin. I think this is going to be a high scoring affair and wouldn't be surprised if both teams hit 80 points. I'm taking the upset in this one, Baylor 84 Wisconsin 80.

2 Michigan vs 11 Tennessee
Michigan displayed some first round jitters against Wofford, but found their rhythm in the second round handling Texas. I think the Wolverines can win at least one more game, but don't count out Tennessee. The Volunteers have been putting up points at a frantic pace averaging 84.5 points through the first two games. Michigan 75 Tennessee 70.

BOLD Prediction
The only game left is 3 Iowa State vs 7 Connecticut. Iowa State has been on a tear in the tournament putting up a tournament high 93 points in the first round and beating North Carolina in the final seconds of the second round. The Cyclones have been drawing a lot of attention from the national media, but my BOLD prediction is that UCONN will win by at least 10 points. Connecticut held off a really good St. Joe's team who came in to the tournament with a lot of momentum and then upset the 2 seed Villanova by 12 points. The Cyclones better not come in flat to this game because the Huskies are not a team to sleep on. They shoot the three ball as well as anyone left in the tournament and can get on a run and put up points fast. The Huskies take this one in impressive fashion, 89-75.

No matter what goes down in the Sweet 16, we're in for a show. Gotta love March Madness!