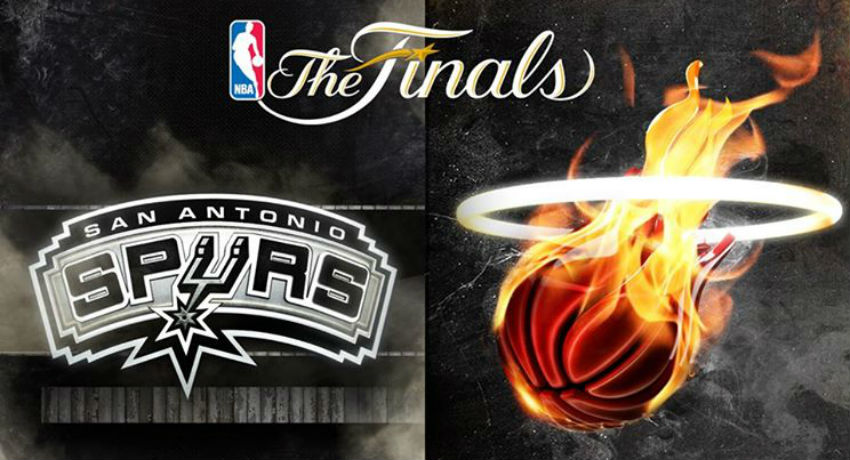 I'm doing it. I'm lifting the cone of silence The Crimson Slate has been in with the latter half of the NBA playoffs.

Why? Because history is on the line. And because these finals are the last piece of real sports (outside of the World Cup which most of you don't care about) that I can write about until football starts back up. Yes, I know this is The Crimson Slate, an Oklahoma centric sports blog. And yes, I know that the beloved Thunder are not part of the finals. But I'm hoping you can put that aside for the moment and enjoy what is shaping up to be a pretty spectacular NBA finals.

Here are just some general thoughts and comments on the finals thus far.

As of right now the San Antonio Spurs are up two games to one against the Miami Heat. A familiar story line if you recall last years finals. One exception, which must be noted, is the format of the series. Last year the finals were a 2-3-2 format where the Heat played 2 games on their home court, then 3 games in San Antonio, and 2 games to finish out the series at home. This year, the format is 2-2-1-1-1 with the Spurs having home court advantage. A subtle difference, yes, but one that could make a notable impact. Instead of either team being able to go back home for the final 2 games of the series, they both could potentially have an opportunity to close it out on their home floor.

Furthermore, in the NBA finals, the team with a 2-1 lead go on to win the series 83.6% of the time. With that being said, if you remember last year the Spurs were up 2-1 only to be one of the nine teams ever to lose a series after leading 2-1.

The first three games of this series have been nothing but good television, though. Game one you've got the drama of the air conditioning "coincidentally" going out in the Spurs arena. Look, I know it's San Antonio, but when was the last time you were in any facility that the AC just decided to stop working? Subsequently LeBron James cramps up in the fourth quarter and the media jumps all over him. The Spurs go on to win the first game and the slogan, "I'm from Texas, I can stand the heat" was born and cheesy t-shirts were made.

But then the Heat come back in game two and pull of an impressive victory in San Antonio. The media machine starts to over react, per usual, and the conversation of just how many rings will LeBron win in his career starts up. People go from calling LeBron a "quitter" and questioning if he pulled himself out in game one, to conceding his third straight NBA championship after game two. And the series was tied 1-1!

Side note, for the reader who is currently trying to pin me into either the LeBron hater's club or lover's club. Stop. I don't fit in either. I appreciate the dude for what he is, the greatest player of this generation. Do I love him? Not really. Do I own a jersey of his like one of my fellow co-writers? Nope (sorry, cheap shot). Do I despise the guy and want him to fail at all cost? No! I'm just trying to appreciate getting to watch one of the greatest basketball players ever in the prime of his career. Now I'm sure every LeBron hater will label me a lover and vice versa. Whatever.

Back to basketball. Game three rolls around and I have no clue what to expect. The Heat looked like the two time reigning champions that they are and the Spurs gave up a game at home. Honestly, I expected the Heat to take care of business in Miami, but then the most impressive half of NBA finals basketball ever played (in my opinion) occurred. The Spurs shoot nearly 90% from the field and scored 71 points in the first half! Led by Kawai Leonard's aggressive play and up by 25 points at half, the Spurs never looked back and emphatically took back a game in Miami. Despite the Heat's best efforts, and even closing the gap to 7 at one point in the third quarter, the Spurs looked like a championship team.

Now I'm at a point in the series where I just don't know what to expect. Who knows how game one would have turned out if LeBron hadn't cramped up. Then the Heat proved that they weren't going to lie down in game two making me think that they might just take over the series. Now the Spurs have come in to hostile territory and had arguably their best game of the playoffs! I feel like I'm watching old school Chuck Liddell vs Wanderlei Silva just throwing bombs at each other with no idea who's gonna get knocked out first!

Listen, love or hate either of these teams (or hate both for that matter), this series has been fun to watch. And however it shapes up, history is going to be made. Either the Spurs cast their bid for one of the greatest dynasties in the history of basketball or LeBron joins the mythical three-peat club all while bolstering his legacy. Would it be nice if this were Thunder vs Heat? Yea of course! But let's not let our sour grapes keep us from appreciating some really amazing basketball. Is it easier for me to say that because I grew up a Spurs fan? Sure. But go ahead and ask anyone who knew me in Norman who I was rooting for in 2012 when the Thunder beat my Spurs to play in the Finals. Yep, the Thunder.