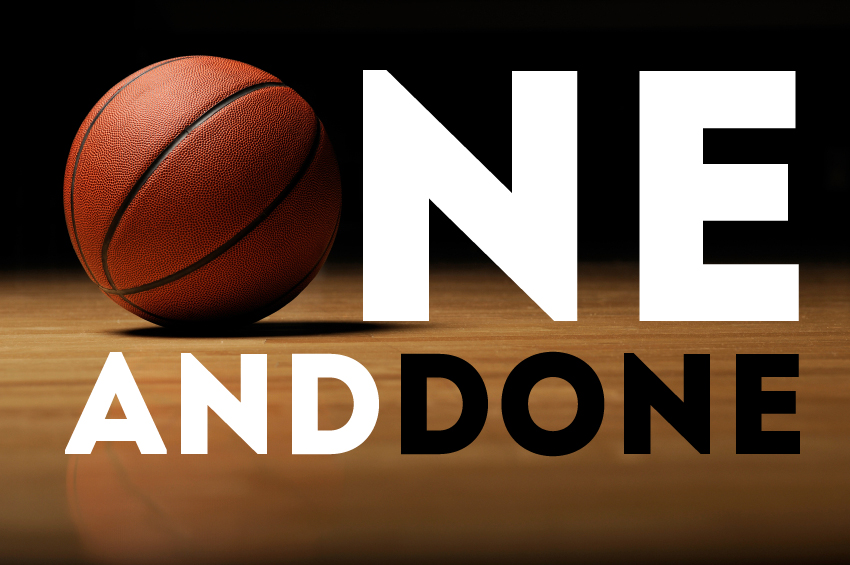 In the "one and done" era of college basketball where athletes typically leave for the NBA after one year of college, the debate of raising the minimum age requirement to enter the NBA draft from 19 to 20 has surfaced again. Effectively athletes would need to stay in college for two years before being eligible to enter the draft.

This has been a hot topic issue in years past and with Kentucky, a school who's become infamous for their one and done success, in the Final Four this weekend it seems only appropriate to bring the issue back to light. The complaints are that the one and done rule negatively effects the competition of college basketball by diluting the pool of players. The defendants of the rule argue that a young man ought to have the right to earn a living in the NBA as soon as he'd like.

Each side has valid points and both think they're right. Let's see if we can make sense of it all.

In 2005, the NBA passed a rule raising the minimum age requirement to enter the draft from 18 to 19. In doing so, forced athletes to spend at least one year in college before "going pro." This rule was put in place after players like Kobe Bryant, Kevin Garnett, Dwight Howard and even Lebron James went straight from high school to the NBA skipping college all together. The worry was that more players, not quite of the same caliber as the aforementioned players, would skip college only to not make it in the NBA when they might have had a better chance after developing more in college. But unless you've been living under a rock, you already know all of this.

Has the one and done rule actually helped though? New NBA commissioner, Adam Silver, doesn't think so. He's advocating for the age requirement to be raised to 20, replicating what college football has in place. At an All-Star Weekend press conference, Silver said, "It is my belief that if players have an opportunity to mature as players and as people for longer amount of time before they come into the league, it will lead to a better league." I think what Silver points out here is key: let them mature as a player and a person. Far too many players come into the league unprepared to face the fame and glamor that comes with it.

But not everyone agrees, current and former players alike. Magic Johnson said on ESPN that he believes that if a kid can go serve his country in the Army at 18 then he has the right to earn a living in the NBA at 18 too. And there are other players who disagree as well. During the 2012 NBA lock-out, this was one of the issues that the league had to consent on before the lock-out would end. I think it's safe to say that not all players are on board with this idea.

That doesn't necessarily mean it's not still the best thing for the NBA. I'd argue that there are a lot of biased opinions in NBA locker rooms when it comes to the one and done rule.

Do I think that every player who comes out of college after one year needed to stay for another? No, of course not. There are always going to be those players who are ready after high school. That's why the LeBron James' of the world were drafted #1 out of high school. But for every LeBron there are 20 Kwame Brown's. And who knows what Kwame would have done after a few years of development in college.

That's the thing, it's all one big speculation. But if it's up to me, I'd rather err on the side of caution when it comes to the quality of competition in the NBA. Plus, it can only be good for college basketball. The way I see it is there is a much greater good that could come out of the age limit being raised than bad.

In fact, look at what it's done to college basketball. These highly touted recruits come in to a program with their minds made up. One and done. They know that they just need one good year and they've solidified their draft status. No longer do you get athletes playing for their school, for a championship or for just the love of the game, but for the hope of money next year. This one and done rule has introduced an age of inconsistency in college basketball that is unprecedented. Because teams can't hold on to their good players it becomes increasingly hard to establish a core. If they have any success all, their starters instantly bolt to the pros (i.e. Kentucky). Bob Knight has gone so far as to say that the NBA has "raped" college basketball on ESPN's Mike and Mike show. Harsh words, but somehow I find it hard to truly disagree with him.

This is a no brainer for me. Let the kids mature for two years before trying to compete against grown men. It's good for the NBA and it's good for college basketball. And maybe after two years of college these kids might actually go back at some point and finish their degree!

Go to college, develop as a player and a person, then go pro.