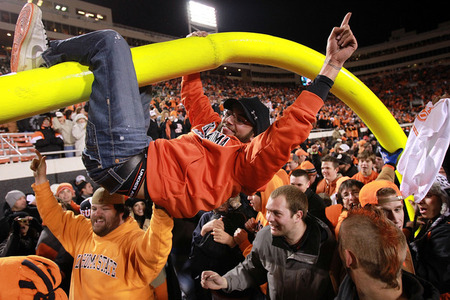 Honestly, did anyone in their right mind think it would be that bad? I'd be willing to lay down the farm that most people thought Bedlam 2011 was going to be similar to 2010, 2008, 2006, 2004, etc. A classic shootout. There were plenty of fireworks. Only this time, the Sooners were the fuse and the Cowboys were the matches. From the opening kickoff, you could sense Boone Pickens Stadium was ready to erupt. It didn't take long. Mistake after mistake and coaching woe after coaching woe sent OU down in a laugher.

Early on, Josh Heupel drew up an unusual offensive game plan. He came out throwing every down. The first run play was an end-around to Trey Franks that picked up two or three yards. No Roy Finch, no Brandon Williams and no Belldozer (more on this in a bit) the entire first quarter basically. Meanwhile, Weeden and company marched methodically down the field over and over putting up 10 quick points and led after one quarter, 10-0. The Pokes did whatever they wanted. Randle and Smith ran wild. Blackmon made his plays. The defense did what they've done all year and forced 5 takeaways. In a word, the Cowboys ROLLED! The Sooners would never get it any closer as OSU routed OU 44-10, and it could have been a lot worse.

What happened last night made a statement to the world. OSU isn't a one hit wonder. They are for real and will compete in the Big 12 and perhaps the national stage for many moons. Mike Gundy has this program on the straight and narrow. There's visible discipline, ball security, heart and determination in every player on the sidelines. The Cowboys have fun playing. They don't care what the spread is, who the opponent is, or what has happened in the past. Gundy has preached the "here and now" all year, and minus one second half collapse, the Pokes have been perfect this year. Still, with 1 loss, up until about an hour and a half ago, 77% of the country thought OSU should be playing in the National Championship game vs LSU including me.

When it was announced there will be a rematch of LSU vs Alabama in the title game, twitter, facebook and multiple other social media outlets flooded with hate toward the BCS. I agree folks, it's a complete mess and a joke. Sure, the Iowa State loss was terrible and Alabama's lone loss came at the hands of LSU….in Tuscaloosa….at night….in front of a national audience. I agree with Mike Gundy. "They've had their shot, give us ours". It's a quirky situation, but a rematch of maybe the most boring game of century is not something I'm fired up about watching. Saban said it himself in 2003. "Any team that doesn't win their Conference Championship has no business in the National Championship". Well, Nick, what say you now? OSU's loss came on the night the team found out their university had a national tragedy. No way were they of sound mind and body. Alabama played Penn St on the road and won. Big whoop. OSU has had the better schedule, beat more ranked teams, and would bring way more excitement to the table in New Orleans. Mark May, Craig James and numerous others are SEC bias. They want the rematch and they are morons. Yes, defense wins championships. Ever think that maybe SEC offenses just suck that bad? I think that's the main reason the defenses look so good. I will say this, LSU's defense this year is stacked.

All that said, great season for OSU. Be proud of your team. You are Big 12 Champions outright. No ties. Please, do us all a favor. Throw those Big 12 South Co-Champion rings away. That's not good. Now you have a real one. A matchup with Andrew Luck and the Stanford Cardinal await. After I dissect this matchup more, I'll update with an article. That's all for now. I just have have to come up with more hate adjectives to come up with the BCS.