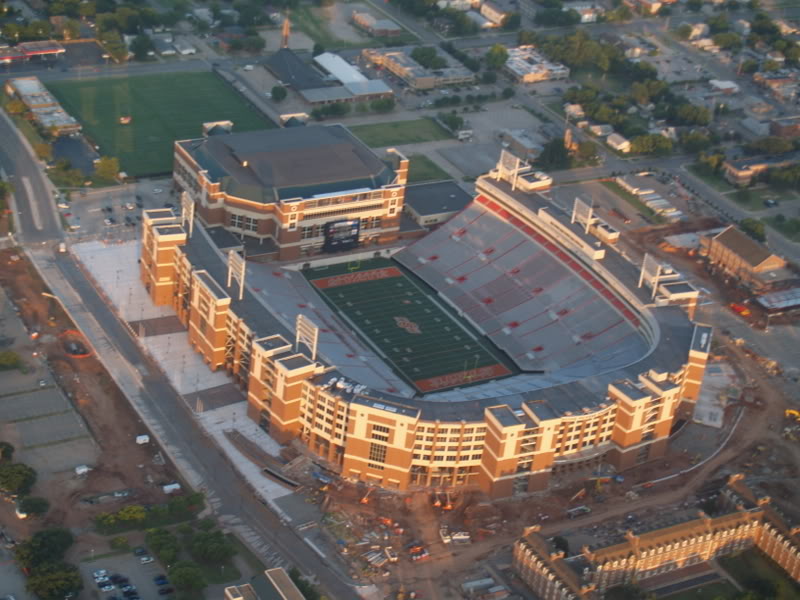 It's bedlam again. This year, there's a little more on the line for the Cowboys. Not just pride. Not just the spoiler role. But, a chance for a Big XII championship and a trip to the Fiesta Bowl. Yes, there's still a .001% chance the Pokes make it to New Orleans, but my money is on a rematch there. So, how do the Cowboys go into this game? Surely not the same way they've went into in the past, with the minor exceptions of one or two times. Here's my take on why the Cowboys will ride to victory.

Offense:
Brandon Weeden, Justin Blackmon, Joseph Randle, Jeremy Smith, Michael Harrison, Josh Cooper. Did I stutter? No. These guys are ballers. They are all Big XII elite players, and what's scary, any one of them can score at any moment. OU has a lot of playmakers, too, but not near this weaponry. The Cowboys have played unbelievable on offense in particular at home. They've dismantled opponents, with the exception of Kansas State, at gold-plated T. Boone Pickens Stadium. When it rains, it pours in Stillwater. Bullett's legs have got to be tired when he takes the field on Saturdays. The players know what's at stake. The fans know what's at stake. With an offense this powerful, I don't see anything getting in the way of a huge point outbreak. The Sooners' defense has been abused more than once this year, and I'm sure Gundy's boys are watching film of the Baylor and Texas Tech game as we speak figuring out exactly where OU is most vulnerable. If the Cowboys do lose this game, it won't be from a lack of point scoring.

Takeaways:
OSU leads the nation in takeaways. Call it luck. Call it being at the right place at the right time. Call it whatever you may, but there's no denying that the Pokes flourish on takeaways, especially at home. They are notorious for giving up a 10 play – 80 yard drive and recovering a fumble or forcing an interception near their own goal line. It's really hard to explain, but game after game, they figure out a way to get the ball back in Weeden's hands. We all know how Landry can be on the road. One or two slip-ups is all it would take to win the game. I do believe it comes down to ball security on who wins this game, and we would all agree, the edge before the game would go to OSU.

Revenge:
Two weeks ago, the Cowboys were stunned in Ames, Iowa. They had their National Title hopes dashed by a freshman quarterback and a letdown on defense in the second half. There's nothing more dangerous than a team coming off of a bad loss, ruining their year. I expect the Cowboys to come out with a chip on their shoulder. I think they will want to show not only the fans, but the voters of the BCS, computers and opponents that they belong in New Orleans to play for the crystal ball. They have a home crowd. There's a ton of players who, likely, will be playing their final game in Boone Pickens. I can't see Weeden and company going out without one more fun show for the sea of orange. At this point, it's all about pride and glory. OSU isn't the OSU teams of the past. This team belongs here. They didn't luck their way here. They earned it and they will show that.

Summary:
Personally, I think the over/under will be placed somewhere around 80 points. That being said, some meteorologists are calling for a cold night with a wintry mix likely. If that's the case, the favorites are from Norman. The Sooners run the ball batter, and OSU is not very good against the run. Notice on how my keys to victory did not include "defense". OU will come out pounding the ball, and if the "Belldozer" gets his chances near the goal line, there's no way OSU will win. If the skies remain clear, I see OSU knocking off OU. Anything short of a win, and it's a letdown in Stillwater for the Pokes. Same goes for OU, too. This should be a battle for ages.