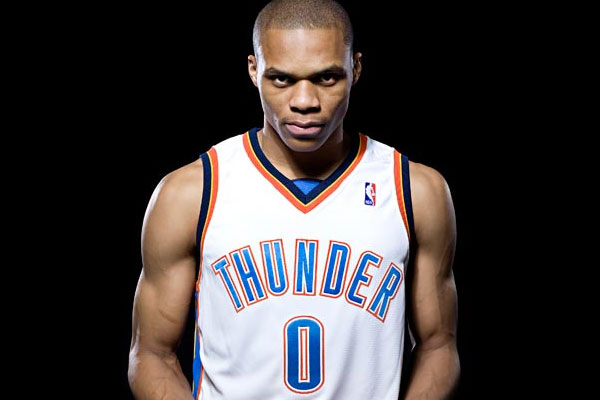 This is a question I've seen floating around the rumor mill lately, so let me go ahead and get it out of the way right off the bat.

Not only should the Thunder not trade Russell Westbrook, but there's no chance Sam Presti is even considering it.

"But look how good they are doing without him! Imagine the return they could get for him! A big man? Draft picks galore? The possibilities are endless!"

Oh how soon some forget the 2013 playoffs. Remember that time when the Thunder went from virtual locks for a return to the finals to being bounced in the second round after a mere five games to the Grizzlies? The same Memphis team who was then immediately swept by the Spurs in the Western Conference finals.

There's also that little tidbit about KD having one of the best months in NBA history. Let's not kid ourselves here. Durant is one of the two best players currently in the league, but he's not going to be able to keep up that torrid pace forever.

Here's the simple facts. Westbrook is a top five NBA player. The Thunder were 21-4 to start the season before he underwent the knife yet again.

Oklahoma City is a better team every day of the week with Russell Westbrook on the floor. Let that sink in for a moment.

No amount of imaginary fairy-tale haul in return for Westbrook is going to be better than what the Thunder already have in place.

Ibaka has stepped up his game and playing the best ball of his career. Jeremy Lamb has finally got his first amount of legit playing time and is starting to blossom into the role player they hoped for when acquiring him from Houston last season. Reggie Jackson has filled in for Westbrook better than anyone could have hoped for, but he is no long-term replacement.

So please, let's put this terrible rumor to bed already. The Thunder are not trading Westbrook.

No doubt the Thunder have gone on a tremendous run despite the loss of their all-star point guard, but this should not ignite demands for a Westbrook trade. Instead, think of how much better this team will be with him.

Won't be too much longer now. I can't wait.

One thought on “Should the Thunder Trade Westbrook?”