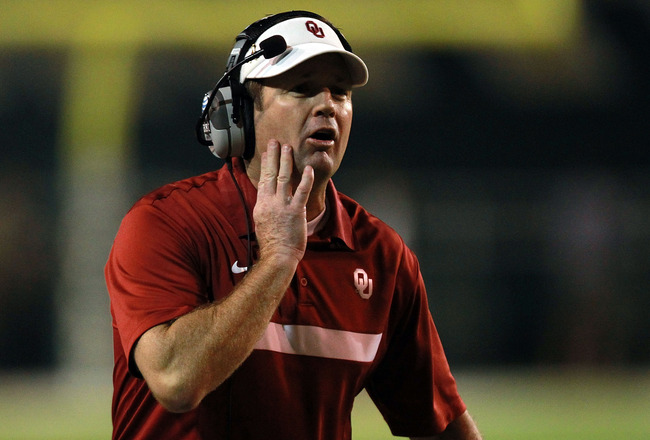 Where to start?  The coaches?  The defense?  The wide receivers?  Landry?  The list is too long and almost too daunting to even take to task, but I've had a couple of nights to sleep on it and am ready to unleash.

First off, while the season may not technically be over yet, it is already a huge failure.  From the preseason #1 ranking to the defensive "sharks" the players hyped themselves as, they are nothing more than fool's gold.  Try to digest this little nugget: the Sooners finished behind Baylor in the Big 12 standings.  Yes, the same Baylor team who had never beaten the Sooners in their entire history finished ahead of them in the Big 12.  Not only will they end the season no where near their preseason projections, but they will finish in a humbling 4th place in their own conference which they have dominated over the past decade and didn't even require a conference championship game for the first time this season.

The real kicker?  All the Sooners had to do was beat OSU and they would have lucked into yet another Big 12 title and right into the Fiesta bowl.  Instead, they get slaughtered in Stillwater and drop down to 4th place in the Big 12 and a comfortable spot in the ole Insight.com Bowl.  I half wish Stoops would decline the invite and just take us into the offseason. This season is over and a 100-0 win over Iowa isn't going to make it any better.

So where does the blunt of the blame lie?  Well it's hard to pinpoint one specific place to lay all the blame when so many contributing factors were at play.  Let's break it down piece by piece shall we.

The coaches.  The sooner coaching staff failed this team in so many ways that it's hard to fit them all in one paragraph.  They allowed this team to feel a sense of entitlement and never brought them back down to reality throughout the course of the season.  Venables has failed to make the necessary changes in the secondary, be it different schemes or players, and has allowed them to continually get burned over and over by the same plays.  Heupel has failed to really get a grasp on the play calling and never even attempted to give the run game a chance, especially in Stillwater.  Stoops has failed to do anything about repeated special teams issues and instead of recognizing his assistant coaches failing and doing something about it he has let them get away with murder.

The Secondary.  The defensive unit as whole has not be horrible this season, but there is one glaring weakness.  The secondary.  The secondary unit has cost the Sooners time and time again and after a certain point of blaming the coaches, you have to look at the players and hold them accountable.  What was once thought to be one of the strong points on the team has done a 180 and turned into one of the biggest weaknesses.  OSU has one of the most high powered offenses in the nation.  They are going to score points.  I get that.  What I don't get is how Texas Tech and Baylor were allowed to shred our secondary and then here we are the very last game of the regular season with the exact same problems.  That's just plain unacceptable.

The offense.  After going off and proclaiming that Mr. Jones, for all his faults, has stepped up for the Sooners in big games…he falls flat on his face.  Perhaps one of Landry Jones' worst games to date, he single handedly gave the opposition more points than he earned for his own team.  The wide receivers weren't much help either.  Landry had a pitiful game, but on the rare occasion he did make a good pass, it seemed like the ball was slipping right through the hands of every receiver on the field.  Clearly Ryan Broyles presence was missed, but even a healthy Broyles wouldn't have saved this broken group of receivers.  Going up against one of the worst defenses in not only the Big 12, but the entire nation, and the Sooners could manage only a banked in FG before half and a Belldozer TD during cleanup duty.  That is simply embarrassing.  We knew the defense was broken, but who knew the offense was broken as well?

All this leads to quite a bit of frustration in Sooner land and I, for one, am not nearly as optimistic for next years outlook as I was before.  Landry Jones has done some great things in his career at OU, but I pray every night that he chooses to enter the NFL draft next year.  For all his great qualities, he just doesn't have that "it" factor that gives you supreme confidence in him when the game is on the line.  Sure, he has delivered on a few occasions, but he's also flopped on numerous occasions too and that instability drives me insane.

Bring on the Blake Bell era.  This is the University of Oklahoma, people.  Why are we still running a gimmicky high paced, spread offense and throwing the ball 100 times a game?  Let's get our big boys in the trenches and take a page from the almighty SEC and run the ball.  The spread has worked against other inferior Big 12 opponents, but it never works against great defenses.  It's time for a change of philosophy in Norman.  It's time to start recruiting defensive players first and focusing on establishing a solid run game.  Let Blake Bell and Dom Whaley pound the rock and let our superior athletes do what they were recruited to do.  Schools with lesser talent run the gimmicky spread offense because they have to.  Oklahoma does not have to.

It's time for a change, Bob.  You can no longer say "Well we won the Big 12."  You didn't win anything this year and you haven't done much more than beat up on the other Big 12 schools in the recent past either.  Get out of your hard headed ways and admit it's time for a change.  Change up the offense.  Change up the defense.  We need some change or we will be stuck with this same good but not great team every single year no matter how many 5 star recruits you bring in.  The Belldozer formation was creative and worked wonders.  We need more thinking outside the box like that if hope for #8 in the near future is to be had.  I am tired of the high preseason hype for the Sooners and the eventual let down at some point during every season.  Bob, I'm pleading with you, make some changes.