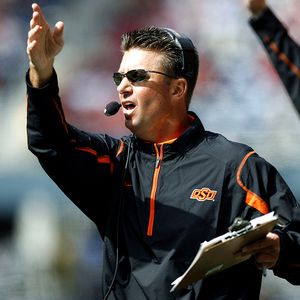 Pokes fans, you can now breathe easy! Mike Gundy will be calling the shots in Stillwater until 2020. Recently, the OSU Board of Regents announced Gundy has received a contract extension worth 30 million dollars over the next 8 years. That's 3.7 million dollars per year. My only question to the people of OSU: "What took so long?"

I feel that Gundy is a top 10 college football coach in the country. He's been a proven winner, he's won a Big 12 Championship and he's finally beaten big brother, Oklahoma. That being said, I feel that the state of Oklahoma boasts 2 of the top 10 coaches in the nation. What a great thing Oklahoma has going.

Coach Gundy has been involved with the football program at Oklahoma State for 20 years combined. Four years as a player and sixteen years as a coach. Since 2005, he's served as the head coach, taking over for LSU's Les Miles. In his 7 years on the Pokes sidelines, Gundy has boasted a 59-30 overall record including 23-3 in the last 2 seasons. He's coached some of the best players the country has ever seen. Some notables are: Adarius Bowman (CFL), Brandon Pettigrew (DET), Zac Robinson (CIN), Dantrell Savage (FA), Dan Bailey (DAL), Dez Bryant (DAL), Kendall Hunter (SF), Russell Okung (SEA), Jacob Lacey (IND), Brandon Weeden (NFL Draft), Justin Blackmon (NFL Draft) and a host of others.

There's no doubt in my mind, Oklahoma State football is here to stay. Gundy has a very respectable recruiting class coming in for 2012 and with the facilities OSU boasts, I would imagine it's only going to get better. The stadium's namesake, T. Boone Pickens, isn't afraid to throw millions and millions of dollars around to better not only the football team, but the entire campus. As long as this continues, OSU will be on the national map for as long as anyone.

Teach Me How To Gundy here

One thought on “Teach Me How To Gundy!”