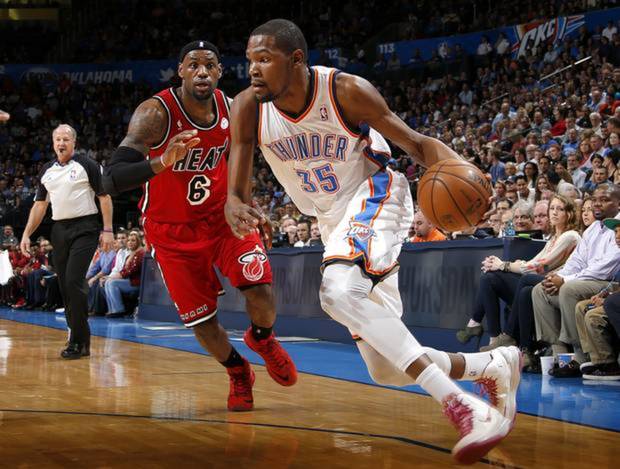 It seems that the media is obsessed with pushing this narrative of LeBron James vs Kevin Durant. Is KD catching up to LeBron as the best player in the world? Is LeBron now back in the drivers seat to win the MVP award after answering Durant's amazing month of January?

I'm going to let you in on a little secret. Kevin Durant is not worried about LeBron James.

Not during the month of March anyway. Not when their only two regular season games with the Heat are in the rear-view mirror. With the way the Pacers have been playing, there's no guarantee the Heat will even make it back to the finals should the Thunder make it out of the West.

Would Durant like to win the MVP award? Of course, but he isn't about to sacrifice what's best for the team in order to bolster his own personal status.

In January, with a 12-game streak of 30-point games heading into a match-up with the Brooklyn Nets, Durant torched the Nets for 26 points on 10-for-12 shooting in just 30 minutes of play. Durant took a seat during the third quarter and did not re-enter the game.

On Monday night, with the Heat up 19 points heading into the fourth quarter vs the lowly Bobcats, LeBron stayed in the game and finished with a career high 61 points.

On Tuesday night, with the Thunder up 22 points heading in the fourth quarter vs the lowly 76ers, Durant took a seat and finished the game with 42 points.

This is the difference between the philosophy of the Thunder organization and most others. Durant could've easily eclipsed 50 points and likely made a push towards 60 if he had remained in the game during a fourth quarter blowout.

But for what? To answer LeBron's 61-point performance the night before? There's more to this season than trying to one-up King James each outing. This is about getting the job done as quickly and efficiently as possible and resting up for the next game.

LeBron had no business playing in the fourth quarter of that blowout win against Charlotte and everyone knows it. But James desperately wants to keep a firm grasp on the "number one player in the world" title and knows he needs some style points to close the gap on Durant this season.

Let LeBron run the score up during fourth quarter blowouts. Durant isn't concerned. He's focused on the task at hand and LeBron James has nothing to do with the current task.