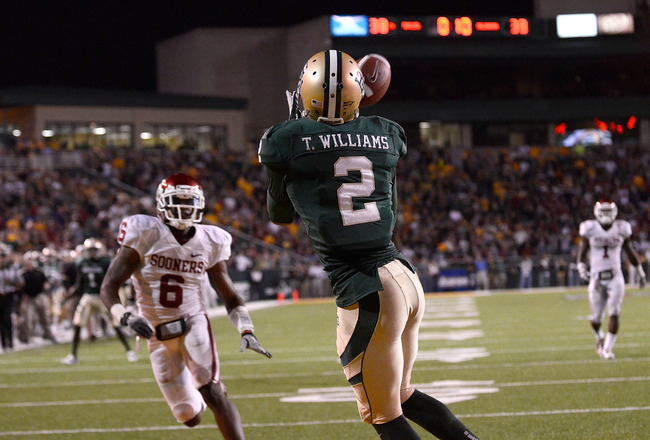 The image above has become a familiar image not only this season, but a reoccurring theme in recent Sooner history.  Every season the Sooners inevitably slip up against an inferior opponent midway through the season and just when we think all hope is lost…the stars align.  You know, all the other undefeated teams that the media deems unbeatable somehow lose and all the other top one loss teams manage to fall to the back of the line.  Such a scenario presented itself once again this year when USC upset Oregon and the Pokes fell to unranked Iowa State.  All the Sooners had to do was win out and they were once again the favorites to be inserted to the National Championship game.

They failed to show up against yet another lower tiered opponent and let the Baylor Bears put up the most yards against them of any team in the entire Sooners history.  Yes, the same Baylor Bears who had never beaten the Sooners.  Not once.  The same Baylor squad who only a few weeks ago were blown out in back to back games vs Texas A&M and OSU.  The same Baylor squad that barely squeaked by a Kansas team in overtime who haven't won a game since week 2.  That very same Baylor team lit up the Sooners secondary for 45 points including a last second heave in the back of the end-zone to erase a 14 point 4th quarter Sooner comeback and send the Sooners right back into familiar territory.

The Sooners find themselves once again out of the national title picture and left only to play spoiler now to the Cowboys BCS dreams and hope for another Fiesta bowl appearance.  But lets not get ahead of ourselves.  Does a team loaded with this much talent even deserve to be playing in a BCS game at the end of the year after falling flat twice in the past month?  As embarrassing as the loss to Texas Tech was, this loss may be even more embarrassing.  More embarrassing because a perennial bottom feeder of the Big 12 is able to get their first win ever over Oklahoma just when the BCS was ready to forgive them for their lone loss and praise them for their superb wins.  More embarrassing because Brent Venables had to have seen the holes the Red Raiders sliced through our secondary yet refused to make any adjustments.  Baylor has no business putting up 600+ yards on any team, led alone the #5 ranked team in the nation supposedly fighting for a shot in the National Championship game.

The Bears probably did the Sooners a favor in the end saving them from the possibility of having to face a far superior SEC opponent and being embarrassed on the national stage again.  Now the Sooners may be able to "salvage" the season by knocking off the Cowboys in Stillwater and winning back to back BCS games.  That would have to be considered a success, right?  I'm sure it would be for a school with less tradition, but Oklahoma football comes with high expectations and simply going 10-2 every year is just not going to please the masses.  Is that fair for Stoops and company?  Probably not, but this is Oklahoma football and they know good and well what is expected out of them.

I will be forever grateful to Stoops for the 2000 National Championship, but Sooner Nation is becoming weary if another will come during the Stoops era.  The sad reality is that our defense has let us down year after year and not been the same since Mike Stoops left for Arizona.  If only Bob would welcome his baby brother back into his arms and show Venables the door…oh if only.

One thought on “The Stars Align and the Sooners Fail…Again”