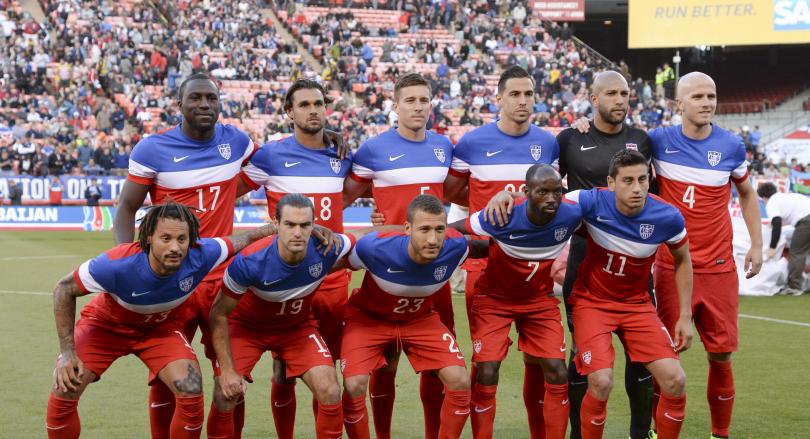 Look, I get it. Most Americans couldn't care less about soccer for 3 years and 8 months, but when the World Cup rolls around people might actually pay attention. Being an avid soccer fan myself and a huge supporter of the US Men's National Team (USMNT), I can't get enough of the World Cup. I've been completely ineffective at work these last few weeks and have done everything in my power to watch as many games as possible. So I thought it would be appropriate to write up something on how the USMNT has done thus far and you might actually care. After all, this is the United Sates Men's National Team. What kind of American are you if you don't support your national team?! Have I guilted you into caring yet?

The Group of Death

This World Cup the Americans found themselves staring face-to-face with the "Group of Death." This is a term given to a group of the World Cup in which typically is the most difficult group deemed by the media. With Germany, Portugal and Ghana in our group we were the undisputed Group of Death. Germany and Portugal are both top 5 teams in the world and Ghana had been the team to knock the US out of the World Cup the last two cycles. Things were not looking promising for the Yanks going into the World Cup, but rather than lay down and let the big dogs run over us the USMNT channeled the chant from the American Outlaws, "I believe that we will win!!"

And that's what they did in their first match. Win. Beating Ghana 2-1 on an amazing set piece header from John Brooks in the 83rd minute the USMNT put the demons of World Cup past firmly behind them. Despite a sloppy performance when the final whistle blew, we walked away with a victory and three points. Setting the stage for a showdown against a beat up Portugal team who would be missing two of their best players due to a red card and an injury. Even still, they're a top five team in the world rankings with arguably the best player in the world right now in Cristiano Ronaldo. Nothing was going to be handed to the USMNT.

After a weeks worth of media hype, Sunday finally came and with it the hope of a nation getting behind their soccer team in efforts to will us out of the Group of Death. Then five minutes into the match we gift wrap Portugal a goal and the doubts begin to rain in. How could we compete with a top five team? Are the flood gates going to open now for the Portuguese side? The US will never be able to hang with the top dogs of soccer. But what transpired in the coming minutes seemingly quieted those fears. The USMNT actually started taking Portugal to task a little bit. They began to battle back from an unfortunate goal and started to dominate the time of possession. Then their offense began to get going. By half the score line was still 1-0, but somehow I couldn't help but find myself filled with hope. We had taken more shots at half time then we did the entire game against Ghana. Could we put something together in the second half and actually tie this thing up? Take me back to Obama's 2008 campaign because YES WE CAN!

Jermaine Jones from outside the box freezes the keeper with a brilliant strike and levels the score at 1-1! Wow! The excitement in our house was through the roof. But that goal was no fluke either because the USMNT kept pressing. My family thought that with the score being tied Portugal would wake up and start playing hard again, but what happened next sent us into a frenzy. Clint Dempsey found himself in the right place at the right time and just like that, with approximately 15 minutes left, the US was beating Portugal 2-1.

All of the sudden the conversation was no longer about getting out of the game with a tie, but advancing to the knock-out rounds with a victory! We were playing so well, and against Portugal! The minutes continued to pass by and our defense was actually playing extremely well, negating everything that Portugal tried. Even containing the best player in the world, Ronaldo, albeit that he likely wasn't 100% but no matter! The 90th minute arrived and we're starting to prepare for celebration. Five more minutes of stoppage time and victory is ours! The defense continues to hold, we even look like we're putting together a little offense when the 94th minute arrived and the ball fell into Ronaldo's feet with room to work on the right side. Our defense caught in transition, Ronaldo sent a beautiful cross inside the box that found the head of Varela who buried the shot along with our dreams. And just like that, the match is over. The latest goal in World Cup history.

Had you told me going into the Portugal game that we would walk away with a tie I would have been elated. But the way it happened has since made me feel a little queasy. I keep telling myself that a tie is a great thing for us and puts us into the position to move out of the Group of Death. But then I keep remembering those twenty-or-so minutes when it seemed as if we were going to do the impossible and beat Portugal. The whole match agreed with the outcome. We had out played Portugal and deserved the win. It was ours for the taking. But then it was snatched out of our hands by a simple lapse of defensive hustle. I think I'm going to vomit.

This one hurt. Almost worse than a loss. And I absolutely hate to lose. If you ask me if I either love to win or hate to lose my answer every time is I hate to lose. But this draw, while it still was a positive for the USMNT, has been eating at me for the last 24 hours.

Even still, with all things considered, we're in a position to move on. It's time to move past the draw and look to the positives. Maybe this article with act as a form of catharsis. If we can hang with a beat up Portugal side and if Germany can tie Ghana then who knows what can happen this Thursday. Yes I know that Germany is maybe the best team in this whole tournament, but if Ghana can pull off a tie then why can't we? Maybe Germany underestimated Ghana which lead to their tie, but I'm going to bet that Jurgern Klinsmann is telling the USMNT that we can hang with Germany. And honestly, after watching the Portugal match, maybe we can! No, you know what, WE CAN! Why not us? Why not now? Our guys believe in themselves and so do I.

Whatever happens this Thursday I am going to be proud of our guys. We were given little to no chance in advances out of the group stage and here we sit going into the last game of group play with a great shot at making it out. If we don't advance to the knock-out round will I be disappointed? Of course. But I'm not going to consider it a failure at all because what I've seen thus far in the World Cup has given me hope that we can compete with just about anyone. If we get smoked by Germany and end up losing by 5, big deal? We aren't expected to be able to play with them yet. But we're on our way. We have some young talent that in four years could take us to the next level. Does that help right now? No, but it ought to give us hope. Our team is finally headed in the right direction and maybe for once we can elevate our game to not just be an after thought on the world stage but rather a formidable foe.

I'm interested to see how the Germany games goes. And you know what? I BELIEVE THAT WE WILL WIN!!!