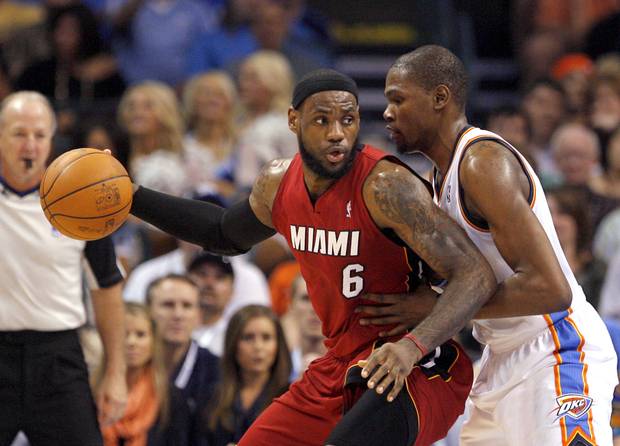 • Thunder vs Heat. Prime time television. The return of Russell Westbrook. A potential finals preview. This one wrote the story for itself, until it wasn't much of a game at all. LeBron heard all the chatter about Durant. He wasn't letting KD show him up this time. Taking the first 53 shots to start the game and making all of them (ok, that may be a bit of a stretch, but that's what it seemed like), King James set the tone early. He wasn't messing around, this was all business. Durant seemed a bit out of place at times. Maybe he was having a hard time re-adjusting to Westbrook's presence on the court. Maybe it was just an off night. Whatever it was, it wasn't pretty for the Thunder. While I'm still not sure why Brooks insists on starting Perkins vs the Heat, this one is far from Perk's fault. I'm going to write this game off as an anomaly and choose not to believe this is how a finals rematch would unfold.

• Three Sooner football players were penalized for eating too much pasta during a graduation banquet last year. I don't even know where to start with this one. My initial reaction is to laugh, but how ridiculous is the NCAA? There is a limit on how much food players can eat at banquets? Who is making up these rules? At least Gabe Ikard and Austin Woods are taking it all in stride. Just proves how big of a joke the NCAA has become these days.

• So the NBA trade deadline came and went with barely a whimper. The Thunder did right by holding their cards and not trying to get cute by changing up what has been working great. Westbrook is back and that's all the Thunder need to make a push to the finals. Amnesty Perk? Get another shooter? Those things sound great in theory, but in reality they already have shooters and amnestying Perk obviously isn't going to happen. On the bright side? Perkins will have an expiring contract next season and likely be prime trade-bait.

• Bill Simmons ranks Kendrick Perkins as the 12th worst contract in the NBA. Hard to argue with him. One of Sam Presti's few missteps was giving Perkins a huge contract upon acquiring him from Boston. To Presti's credit, everyone thought it was a major coup for OKC at the time finally getting the allusive "big man" that had so desperately been missing. Count me among the bunch who were thrilled when the blockbuster trade went down, but there's no question I'd rather have Jeff Green back in the blue and orange instead of the broken down big man. And that $8.7 million Perkins is making this year? It makes me sick thinking of the players that could be had with that money.

• Confession: I root for the US in the Winter Olympics about as much as I root for OU women's softball. I'm definitely happy if they do well, but I don't much care to watch. Now the Summer Olympics? That's a different story.

• I always thought it was pretty hokey during a college football game when a player would be flagged for "targeting" and then instantly ejected with a 15-yard penalty tacked on. But wait, if the officials review the play and determine there was no foul then the player is not ejected, but the 15-yard penalty still stands? Looks like the NCAA realized how silly that was and is changing the rule. While I still think a first time offender being ejected is a bit harsh, at least they are amending the rule to where if it is reviewed and determined not to be a foul then the 15-yard penalty no longer stands.

• Haven't quite figured out if the OU men's basketball squad is worthwhile or not yet. College basketball has been stale for so long outside of March Madness, but a legit Sooners run in the tournament could grab my attention again. They're probably just messing with me though.

• Russell Westbrook is back and that's a good thing. Can we please stop with the ridiculous speculation about the Thunder being better off without Westbrook? Please, pretty please. Last night he looked rusty, but still explosive. There may be some growing pains in the next couple of weeks with everyone adjusting to their new places on the court, but this team is better off with #0 in the lineup.

One thought on “Weekly Wrap”