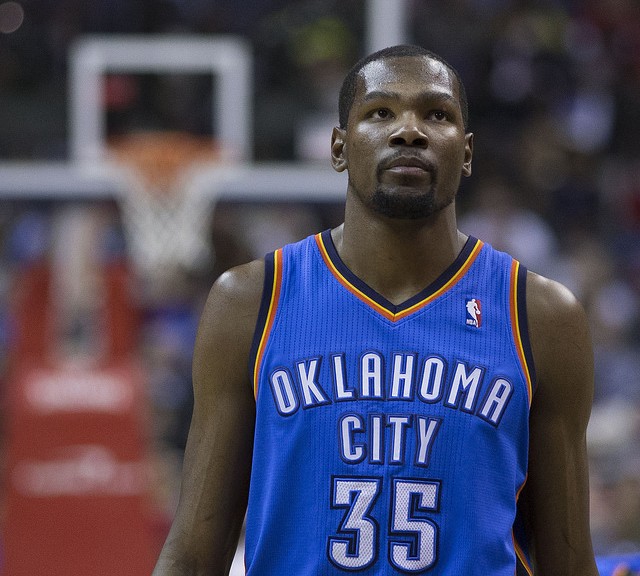 • I had a nice little opener already typed up. I went on about how refreshing it was to see the Thunder reel off four straight wins even if they were all over middle of the road to bottom feeder opponents. It still felt good to win. It felt good to see Westbrook finding his rhythm. During the third quarter of last night's showdown with the Suns, the Thunder looked to be heading towards another comfortable win and their fourth straight. Then the Suns finished the quarter on a 21-2 run closing out a 40-point quarter and proceeded to win the game. For as good as the offense has looked, the Thunder defense has looked worse. You can say the Suns "got hot" and "couldn't miss," but that excuse only gets you so far. At a certain point you have to look at the recent stretch of games since the all-star break and realize that this team just isn't getting it done on the defensive end. They are not going to be able to out-score every opponent. The three wins prior felt good, but this last loss, especially in the manner in which it was lost, feels miserable.

• With all the negatively out of the way, how good has Russell Westbrook looked these last few games? He was definitely rusty in his first two appearances back from injury, but has quickly returned to his former self. On Tuesday, he recorded the second fastest triple-double in the history of the game. Woah. Finished 36-9-9 last night including a red hot start going 6-7 shooting in his first six minutes on the floor. Anyone still questioning if Westbrook's return was a good thing for this team? Good, didn't think so.

• SoonersSports.com does a good job breaking down each position heading into Spring practice. Is it football season yet?

• The Thunder will head out to Los Angeles on Sunday to take on the Lakers before returning home for a three-game home stand vs the Rockets, Lakers, and Mavs. All very winnable games. I don't think it's asking too much to see a respectable defensive performance or two in there.

• One last thing on the Thunder defense. I get that they are without Thabo and Perkins right now, but the defensive issues run much deeper. The Thunder aren't contesting open jump shots. Sure Perk can clog up the lane, but that hasn't been where they've been getting beat. If anything, Brooks likely should have countered last night's ultimate small-ball lineup by Phoenix by sitting Ibaka down more than usual. He didn't have a place defensively as the Suns reigned down long jumper after long jumper with a good portion of those going uncontested.

• Brandon Chatmon at ESPN had a solid write-up regarding Stoops trying to keep young Sooner players hungry despite the Sugar Bowl win last season. It was one of the biggest wins in Stoops career. Here's to hoping for a promising follow-up campaign in 2014.

• Anyone checked out this new Thunder app? I'm enjoying the simplicity of the design, but the the ability to customize it to my liking (adding more rss feeds, twitter handles, etc) is a real boost. The Twitter function gets a lot of use from me during Thunder games. I like to follow what people are saying real-time during the game and this sorts out all the non-Thunder chatter. Good stuff, I'd definitely recommend checking it out.

• With the use computers, smart phones, and almost everyone using some sort of electronic device to check the time these days, I wonder when the last time Daylight Savings Time actually caused someone problems. Admittedly I still wear a wrist watch, but it's more out of habit than necessity. My iPhone will automatically update the time for me and my alarm clock on my phone will auto-adjust with it, but hey, don't forget Daylight Savings this weekend you guys!