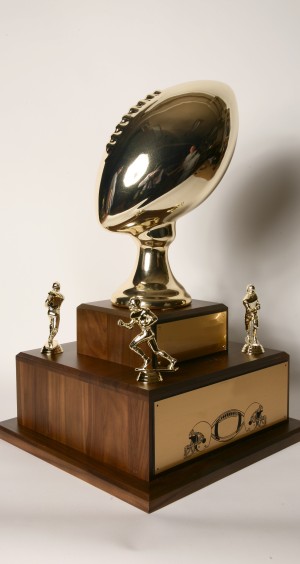 Well, it's that time of year in the Great State. High School football playoffs are upon us. Today, I will dissect Class 6A through Class 4A. There's a few surprises out there. Fasten your seatbelts!

Semifinal 1 – Owasso (9-3) vs Broken Arrow (11-1)
Owasso is coming off of a very impressive performance against an 11-0, number 2 ranked Midwest City Bomber squad. The Rams overcame a 14 point halftime defecit and prevailed, once again, squashing the hopes of a west 6A team winning state.
Broken Arrow is the heavy favorite in this game. Their only blemish was a 7-point defeat at the hands of powerhouse Tulsa Union. Other than that, the tigers have been downright unstoppable.

Semifinal 2 – Union (11-1) vs Jenks (10-2)
Here's what most in the state would expect to be the state finals matchup, yet again. Wrong! Jenks was knocked off twice this season and did not win it's district. However, they've handled business thus far in the playoffs drubbing both Stillwater and Edmond Santa Fe with a combined score of 86-35. Sooner commit, Alex Ross, leads the backfield, and Trojan fans have to be excited he's finally healthy and back in the lineup.
Union is 11-1 on the year, as stated above, with their only loss coming from Owasso. Clearly, all four of these teams know each other well as they are all from the Tulsa metro area. Jenks is flashy and solid on defense when it matters most. This should be a dandy!

Semifinal 1 – Guthrie (12-0) vs McAlester (12-0)
Guthrie is the number 1 ranked team in 5A, and have been the majority of the year. However, as most know, Head Coach Rafe Watkins is not on the sidelines this postseason. There was a dispute filing paperwork on a transferring player, that was against OSSAA policies. Thus far, the Blue Jays have taken care of business in the first two rounds, but narrowly squeaked by Tulsa East Central in round number 2 at "The Rock". Guthrie is vulnerable without Coach Watkins, but they won't go out without a huge fight. They are number 1 for a reason.
On the other hand, McAlester is a juggernaut on offense. They hand opponents a healty portion of both air and ground attacks. I watched first-hand last week as the Buffaloes handled the Duncan Demons. The score wasn't a reflection of the game. "Big Mac" had over 400 yards rushing and over 150 yards passing in their quarterfinal showdown. One thing is certain, there will be points put up in this one.

Semifinal 2 – Lawton Mac (12-0) vs Ardmore (8-4)
Lawton Mac is the easy choice here. They are dangerous on both offense and defense. They are coached very well. They are sound on defense. They rarely make mistakes. The Highlanders have been the most consistent team of the year. They have to be the favorite at this point, but with these teams at the top of 5A, and on a neutral field, anything can happen.
Those pesky Ardmore Tigers. All they did was sneak in the playoffs with a 6-4 record, and have advanced all the way to the "Final 4", if you will. They are really good defensively. They are athletic and aren't afraid of anything. One of their defeats came against McAlester early in the year by a score of 25-20. They will come out aggressive and are most dangerous as a serious underdog. Those teams in the playoffs are always scary to undefeated teams.

Semifinal 1 – Catoosa (12-0) vs Clinton (11-1)
Catoosa is 12-0, ranked number 1 in all of class 4A. Numbers say they should coast into the finals on December 2nd. They have an absolutely incredible defense. They are stingy. Their only scare was in the first round of the playoffs against Broken Bow (24-21). Other than that, they've handled their business very effeciently.
Clinton seems to always find a way. They've won their fair share of titles. They are 11-1 and on a mission as always. The Red Tornadoes will storm into this game with all kinds of confidence. Experience, discipline and class is all everyone knows about Clinton. I expect a classic!

Semifinal 2 – Wagoner (11-1) vs McGuinness (10-2)
Wagoner, in recent years, have produced some very athletic, talented football players. The Bulldogs have always knocked at the door, but never have pushed through, like some would have thought by now. This might be their best chance. They have an experienced group back. They are fast and elusive on offense. They tackle well and won't give up too many big plays. Their secondary will have a plate full!
McGuinness is back again. Seems like they always produce enough talent to make it this far, and in most cases, the whole way. Camden Tharpe is a stud. He slings the ball as good as anyone in Oklahoma. Their wide open offense is difficult to stop. When the opposition finally figures that out, Tharpe can run it just as well. He's the definition of "dual threat quarterback"
FIREWORKS, FIREWORKS, FIREWORKS

If you have a chance to get out, go see these young men leave it all on the field. We were all there once. Nothing like some good, old-fashined Friday Night Football! Should be interesting!

(Note from twintowersports.com)
Class 3A-B will be updated as the semi-finals take stage. They still have a few weeks to go. Updates will be available as soon as possible.