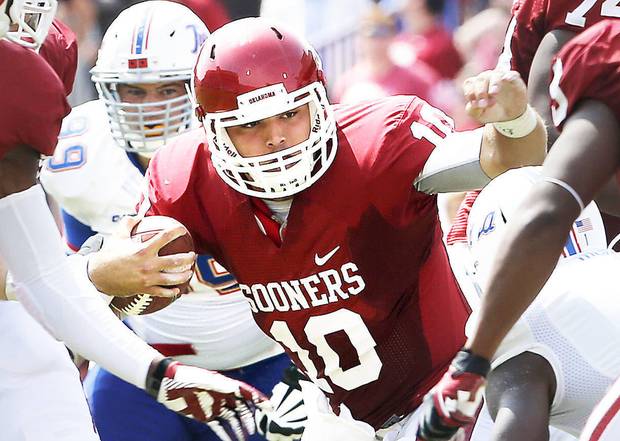 In sports, we recognize players, sometimes, based on their positions alone. We associate Sam Bradford as the starting quarterback for the Oklahoma Sooners. We recognized Adrian Peterson as the starting running back. At times, we get caught up in where players play, instead of what they actually do on the field.

In comes Trevor Knight, a scout team superstar the past season at Oklahoma. Coaches raved, players raved, fans wondered. Then, on August 31, 2013, Knight took the field as the starting quarterback vs the ULM Warhawks, leaving Bell waiting, again. You can only imagine the heartbreak from once the guy who was going to change the way Oklahoma played football on offense, to the guy who had to wait some more.

Knight struggled early, giving Bell a chance to play. Bell, not too long into the season, became Oklahoma's starter, and he played very well. Against Tulsa, he was 27-37 for 413 yards and 4 touchdowns. Then, a week later in South Bend, Indiana, Bell was 22-30 for 232 yards and 2 touchdowns. Both of these games were 2 touchdown or more wins. Bell had finally hit his peak. He had found his time. He had cemented himself as the next guy who could possibly have his statue held erect outside the east walls of Gaylord Family-Memorial Stadium.

And then, after a lackluster performance against TCU, struggles became mighty.

Against Texas, Bell played quite possibly the worst game by an Oklahoma quarterback vs Texas since Rhett Bomar in 2005. It was as bad as it could have been. Something switched off. Something just didn't seem right. Was it the game plan? Was it nerves? Was it too much pressure too soon on the first year starter? We may never know. What we did know is that Bell wouldn't be the answer much longer for the Sooners.

In the coming weeks, Bell's play continued to be less than stellar. 131 yards passing at Kansas. Yes, Kansas. A week later, he played a little better at home against Texas Tech, but nothing short of just average. He piled up 249 yards that night, and OU squeaked out a win.

The game at Baylor finalized Blake Bell's career as OU's starting quarterback. He threw 2 interceptions. One right before the half that allowed Baylor go go up 24-5 at half. A deficit far too steep to come back on, against a top 10 team, on the road, on national television.

In comes Trevor Knight, again. Against Iowa State, Knight dazzled the crowd with his legs. He had a moxy about him that Bell never did. He was amazing at getting the crowd hype. From there, it was no looking back. Knight led OU to 2 straight wins, then around halftime of the Bedlam game, Knight injured his arm. In comes, again, Blake Bell. He led one of the best drives in OU history, giving Oklahoma a 27-24 lead in the final seconds on a perfectly throw ball to Jalen Saunders in the back northwest corner of Boone Pickens Stadium.

Something happened in the weeks leading up to the All State Sugar Bowl. Knight evidently won coaches over and he was given the nod vs mighty Alabama and the vaunted SEC powerhouse defense.

What happened that night would never overturn Bell's future. Knight, again, vs the "best defense ever to take the field," lit the Tide up, leading Oklahoma to a Sugar Bowl win vs Alabama. Knight led the sooners to 45 points. He was 32-44 for 348 yards and 4 touchdowns. Bell was again, watching. Supporting. Cheering. Leading.

Then came the bombshell.

On Feb 8, 2014, Bob Stoops announced Blake Bell would transition to Tight End. Wait? What? I think the entire Sooner Nation had 2 thoughts.

I was more of number 2. Then I remembered. Bell has waited. He's played. He's waited again. He's played again. He's been the definition of a team player. Not one time, ever, has he complained. He's never questioned the coaching staff. I expect more of the same this time around as well.

Bell was a receiver in high school, before transitioning to quarterback. He has incredible athleticism. I don't think the speed of the game will give him too much trouble. The only concern I have is this. Is he going to take so much of a beating that he can't backup Knight in a pinch? Will OU have a viable backup quarterback plan?

I think we have seen some of the most selfless athletes at OU. Paul Thompson anyone?

Look for Bell to do whatever it takes to bring number 8 to Norman next January.

Til next time, BOOMER SOONER!