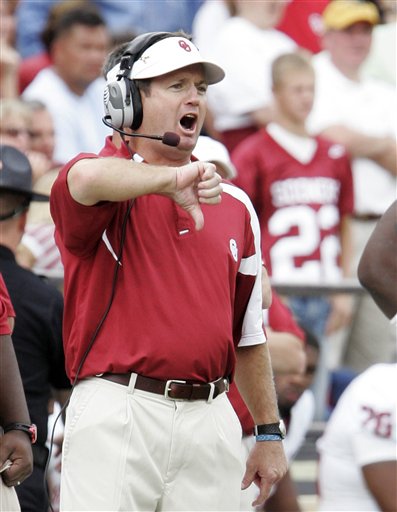 As we've all heard, freshman running back Brandon Williams and a host of other Sooners players are asking for a transfer from the University of Oklahoma. Why? Williams used the excuse of having a baby in Houston and he needs to take care of it better. Why not go to Houston? Why Texas A&M? I know College Station is semi-close to Houston, but why not just go to Houston if you need your baby in your arms every night? As for the others, who really knows. I have some thoughts, though. Bare with me as I might get a little animated.

Has Stoops lost this group? I think partly, yes. I think these players are upset with the coaching staff. Here's my first example.

Justin McCay – 5 star rivals recuit – WR – 6'3" – 215 lbs. He's never played one snap as a sooner. Played in the Army All-American game out of high school. One of the most highly touted receivers in the country. Yet, not good enough to beat out playing time from "Pan Hands Miller"? I don't buy that. I think it's something more than that. Broyles went down. Jaz Reynolds went down. Why didn't the coaching staff play McCay? I don't get it. Sure, Kameel Jackson is going to make a very solid receiver for OU, but why not try McCay. His redshirt year is over. No sense in shelving him for a whole year again. At least let us see what he's got.

Torrea Peterson – 4 star rivals recruit – DT. Has OU ever been this thin up front? JaMarkus MacFarland and Stacy McGee did well. No doubt. But why didn't OU get to see this beast most thought he would be? OU has been notorious over the years for swapping in and out defensive lineman. This year, the Sooners ran MacFarland and McGee into the dirt. Hardly any substitutions were made up front. It was baffling. Now, rumors speculate he's leaving as well.

These are just two examples of players leaving. Rumors are swirling that there are up to 15 players applying for a transfer, which would be a mind-boggling number. Also, Ronnell Lewis is most likely going to the NFL. Personally, I think he's super raw, but kudos to him for being able to take care of his family now. Some have speculated that he's never really been happy at OU. He could have been a monster at linebacker, but the coaches insisted he play at defensive end. Not sure what that was all about.

There can be a million reasons why this is happening. My guess, "OU is full of a team of characters, not a team OF character" – Chris B. Callahan.

Stoops and the staff has always prided themselves with being a team of prestige, graciousness, gratitude, integrity and loyalty. I think this year was different. It seemed at the first of the season, the players were dedicating this season to their fallen teammate, Austin Box. I don't know if that kind of went away, or after their first loss to Tech, it kind of killed that mojo. It did seem this year that it was all about the name on the back of the jersey instead of the name on the front. Maybe OU should go back to the season of 2005 where all the name were taken off the back of the jerseys. Maybe I'm over thinking and maybe I'm not giving enough credit to the staff. There was just something missing from this season. The swagger left the team after OU/Texas completely. A 55-17 drubbing of your arch rival and you tank? I don't get it. I hope to get a lot of responses to this. Maybe someone can enlighten me on what exactly is going on in Norman. I can guarantee you this. If there's no changes made with the staff, players and overall persona, Oklahoma will never get to number 8 in our lifetime.

3 thoughts on “What’s Happening in Norman?”