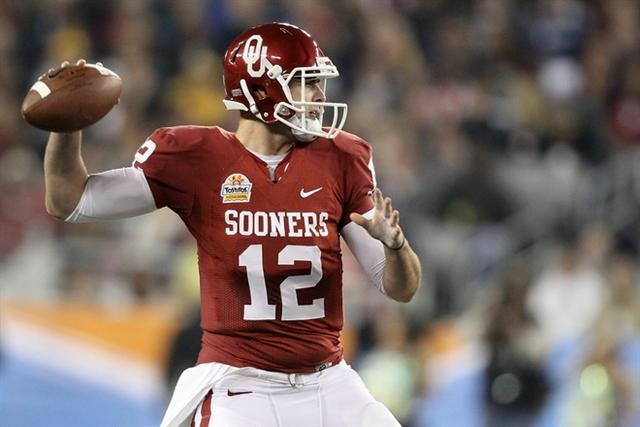 Landry Jones has a big decision coming up that will effect the landscape of OU football.  To stay or go?  I know most of the "experts" are predicting that the Sooners should be a preseason top 10 ranked team going into 2012, but only if Stache Jones shuns the NFL and returns for a senior season.  Let's just agree to disagree.

Does Landry present a safe and comfortable feeling returning for a 4th year running the Sooner offense?  Sure, he has been the one behind center since Bradford went down way back in 2009.  Jones had also shown improvements every year as a starter and going into the 2011 season he had all the big wigs convinced this was his big breakout year being a preseason Heisman front runner and leading the #1 team in the AP polls.  The only problem was that Landry stopped improving this past year and was out performed by red-shirt freshman QB Blake Bell.  If anything, Landry appeared to regress from the 2010 season.  After his go to target in Ryan Broyles went down with an ACL tear, he looked absolutely clueless throwing only one TD pass the rest of the year.  His mobility rivals that of Jason White's after 3 knee surgeries, except Landry has had no such surgeries and his decision making and accuracy are not even in the same ballpark as the 2003 Heisman trophy winner.

But Blake Bell has only ran the Belldozer formation and that won't work running every down, it's only useful in goal line and short yardage situations, you say?  I say with a little tweaking to the offense that Mr. Bell can be the stud QB they recruited him to be.  Sure he can run the ball very well, that's already been proven.  But we have yet to really see him unleash a deep ball or given a chance to run a half way normal offense.  The only pass attempts we've seen from him have come from the goal line with barely any room to work.

Blake Bell has the potential to be a better version of Tim Tebow.  While Tebow may have honed the craft of scrambling and elusiveness, I have no doubt that Bell can throw the ball better and isn't too far behind on carrying the ball.  Give him the right circumstances and opportunity and there is no telling how far Blake Bell can take this young Oklahoma squad.  We've seen Landry for 3 straight years, we know what he brings to the table.  Are we so spoiled that the opportunity for a Big 12 championship and BCS bowl game is not enough?  Maybe I am.  Maybe the thought of having no real legitimate shot at a national championship with Landry under center eats away at me.  The unknown possibilities of Blake Bell excite me.  The known limitations of Landry do not.

Is it unreasonable to expect Blake Bell to come in and lead the Sooners to a national championship game in his first season as a starter?  Absolutely.  While it may take him a season to fully acclimate and adjust to the offense around him, I feel much better about his odds in 2013 leading the Sooners with a year experience behind him than I do with another so-so year with Landry and then Bell finally getting his first opportunity going into his red-shirt junior year.  Send Landry to the pros and let Bell have the reigns for the next 2-3 years.  That excites me for next year and beyond.  Landry may have a serviceable career in the NFL under the right circumstances backing up somewhere, but I feel his time at Oklahoma should come to a close.  Now it's just up Landry to decide the fate of Sooner football for the next few years.

5 thoughts on “Why Landry Jones Should Go Pro”