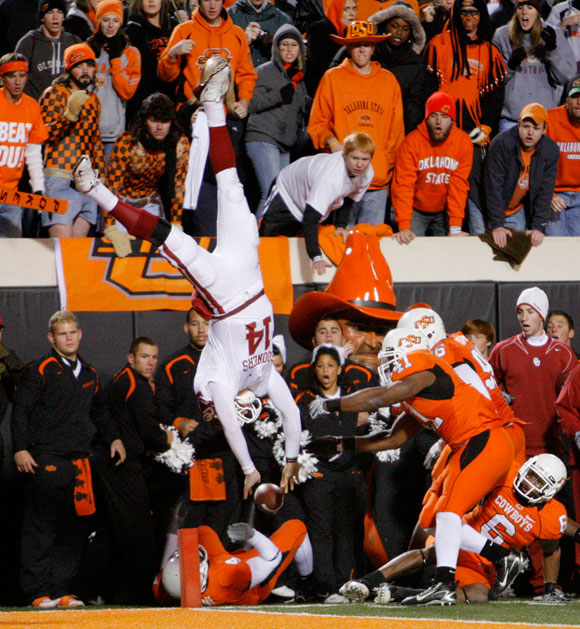 Bedlam is finally upon us.  There are many biased and outspoken fans in the state of Oklahoma trash talking each other this week and I will be no different.

So why, exactly, do I think the Sooners will win Bedlam this year?  Well, it's pretty simple actually.

From the previous 105 games played between the two teams, the Sooners have come out on top 82 times.  What's that?  No one cares what happened 100 years ago?  OK, how about the last 8 straight the Sooners have won against their in-state little brothers?  You have to go all the way back to 2002 to find the last time the Pokes were able to upset the Sooners.  That's including a very similar Cowboys squad last year that hosted the Sooners in Stillwater with the very same high octane offense yet failed to win a shootout.

So enough about the past, why will the Sooners win this year you ask?  Here are a few reasons:

Offense.  This point is pretty self explanatory and can easily be argued from either side, but I'm sure you know which side I'm on by now.  The Sooners offense is the one thing that has not floundered this season even through the two painful losses.  It is no secret that the Sooner secondary has more than a couple of holes in it, but the offensive unit has surprisingly yet to wilt despite season ending injuries to their top WR and RB.  For all his faults, Landry Jones has continued to deliver when the Sooners needed him most and he has especially stepped up in big games this season.  There is no doubt this game will be a high scoring affair.  The Sooners don't need their defense to win the game, they just need to be the last ones with the ball in their hands.  The Sooners have shown that they are able to adapt and come up with new schemes to get the ball in the end zone, which leads me to my next point…

The Belldozer.  I won't try to hide the man crush I have for Blake Bell and his Tim Tebow-esque knack for getting in the end zone.  The addition of the Belldozer formation was nothing short of pure brilliance from the Sooner coaching staff.  Everyone knew the offense continually sputtered in the red zone.  Everyone knew they had a potential stud QB waiting in the wings, but how could they possibly bench their Heisman candidate QB to resolve their red zone woes?  I won't go all statistician on you, but trust me when I say that Blake Bell's numbers speak for themselves in short yardage situations and has no question been the answer to the Sooners goal line issues of years past.  Iowa State lined up 10 men in the box.  Didn't matter.  Bell is a force to be reckoned with and finds a way to get in the end zone even when opponents know it's coming.  Once he masters the skill of passing the ball, there is no telling his limits.

This is a big game.  There is no question this is a big game, but how does that play into the Sooners favor?  The Sooners have been notorious for getting up for big games, but allowing lesser opponents to jump them while they have their eyes set on the next "big game".  Unquestionably, the Sooners have had their eyes set on OSU for some time now and probably overlooked Texas Tech and Baylor leading up to Bedlam.  The Sooners national championship dreams this season may be over, but a Big 12 title and BCS bowl are still well within their grasp and they fully intend on making sure little brother doesn't mess with those plans.  The Sooners may have overlooked previous opponents, but there is no doubt they will be up for this game and they have proven to succeed in every other big time game this year.

In the end, I fully expect a wild shootout similar to last years Bedlam madness.  While the Cowboys should rightfully be favored going into this game, I just can't see the Pokes breaking the streak this year even though it may be the best chance they've had since that fatefull night in 2002.  If there is one thing that we know to be true, it's that history repeats itself.

3 thoughts on “Why The Sooners Will Win Bedlam”