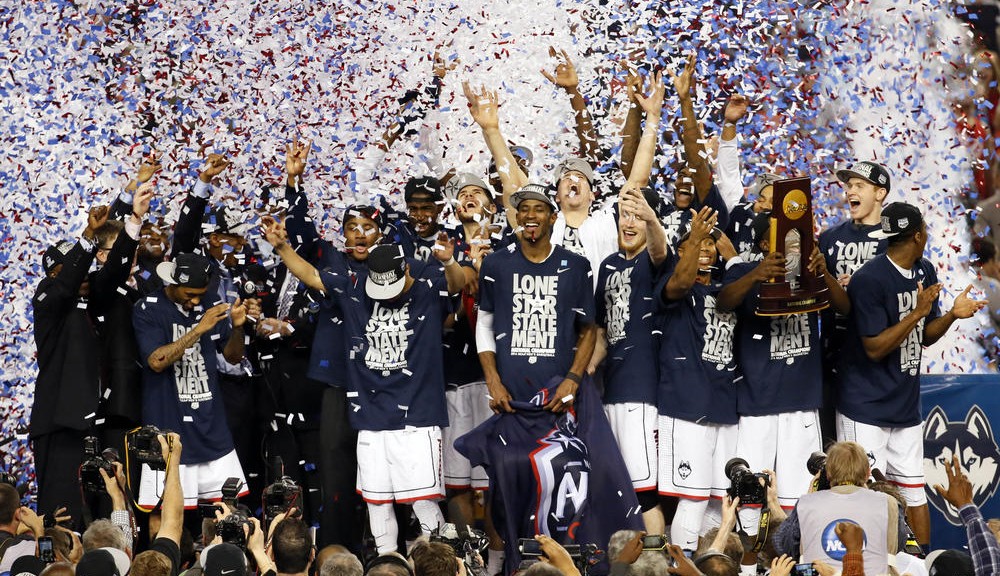 This year in college basketball, men's and women's alike, belongs to the University of Connecticut.

This year, UCONN will have the pleasure of raising not only one, but two championship banners. Undoubtedly Husky fans every where are riding on cloud 9 right now. With the Lady Huskies going 40-0 and the men's team winning as a 7 seed, an interesting question is posed…

Your initial, knee-jerk reaction, like mine, is probably "Well duh, the men's team is more impressive because women's sports is a joke." Not so fast my friend! While I may not completely disagree with you on how laughable women's sports may or may not be, that's not the question and you can't deny that going 40-0 in any sport is impressive! Personal opinion aside about women's sports, going undefeated is no small feat.

Let's take a closer look, starting with the Lady Huskies. After all, ladies first, right? Have you ever been a part of an undefeated team, at any level? I haven't. And few can say that they have because going undefeated is hard! Yet this group of women managed to reel off 40 straight victories, including a tournament title against another undefeated team. The last men's team to go undefeated and win a tournament title was Bobby Knight's 1976 Indiana Hoosier's and that was nearly 40 years ago. The only team in the NFL who's gone undefeated is the 1974 Miami Dolphins (thanks to Eli Manning and co.). No other team has come close to an undefeated season in the MLB, NBA, MLS, WNBA, PBA, PGA or WCP (can you go undefeated in poker?). So let's pump the brakes before we just dismiss the Lady Huskies right off the bat.

Am I arguing then that the women's team had the more impressive accomplishment? Not exactly. Not yet, at least.

The men's team's resume is just as impressive becoming the first team ever to win a tournament title as a #7 seed. Only the 1984 Villanova Wildcats have a tournament title to their name as a lower seed (8 seed) and further more, no #7 seed has ever even made it to the Final Four let alone the championship game. The Huskies weren't a product of upsets either. Their road to the championship game was as hard, if not harder, than any other. In order, the Huskies took down a #2 seed, #3 seed, the tournament darling #4 seed (Mich St) and then the #1 overall seed (Florida). Coming into the championship game, UCONN faced arguably the hottest team in the tournament, Kentucky. Even before the game the "experts" on the pregame show unanimously picked UK to win (maybe simply hoping that a certain young man wouldn't have to regret said tattoo forever). None of this, however, affected the Huskies as they came in and took care of business solidifying themselves as one of the greatest tournament performances ever.

So, which accomplishment is greater? Well, as impressive as it is to go undefeated in any sport, as I mentioned earlier, it seems to happen about every third year in women's college basketball. In fact, 7 out of the last 20 years in women's college basketball has ended with an undefeated team winning it all. And yes, 40-0 is a huge win streak, but doesn't seem quite as impressive when you consider that just three years ago the same Lady Huskies program had a 90-0 streak. And again, as I stated before, this is the first men's 7 seed to win a championship with Villanova being the only team to win it as a lower seed in '84.

You combine that with the road the Huskies went through to even make it to the championship game and this one is a no brainer. The men's team hands down had the most impressive accomplishment. Either way, it's a great time to be a Husky fan.