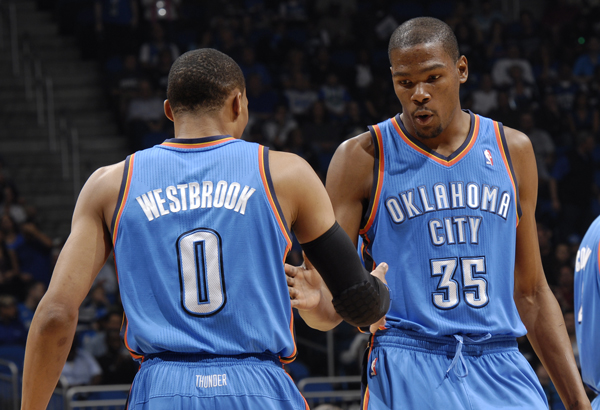 Thankfully, the NBA owners and players came to their senses and heeded my advice to find a way to salvage this season.  Now the question is, has the lockout slowed down the momentum the Thunder built up coming into this season?

With the season now being broken down into just 66 games and numerous back to backs being played, this schedule falls right into the strengths of a young Thunder squad. While older teams may experience some issues with the sheer amount of back to back games, the Thunder should be just fine with their young legs.  Until the free agent market clears up and we know which big time players will be playing where, it's going to be hard to break down the Thunder's main competition in the West.

Instead, let's focus on what the Thunder have and how they can build on last season's success.  Obviously having one of the best players in the league in Kevin Durant immediately makes any team forced to be taken seriously.  Throw in another all-star in Russell Westbrook and you've got a team that is a legit title contender.  The fact that both of these all-star players are only 23 years old is almost mind boggling.  They have yet to hit their prime years.  Now, if you regularly follow the Thunder then I'm not telling you anything you don't already know.  But what pieces do Durant and Westbrook have around them to fill out a true title contending team?

The addition of Kendrick Perkins last season didn't exactly take off like most fans had hoped for.  While Perk was hobbled for the majority of the year, he failed to really impress many.  This year there will be no excuses and Perkins has got to be that force in the center of the lane making players think twice before slashing to the hoop.  Serge Ibaka came on strong last season and really established himself as not only a premier defensive player leading the team in blocks, but also finding his rhythm with a mid range jumper.

The emergence of James Harden last season was a huge boost.  Harden spent the majority of last season coming off the bench and filling that offensive void left in the second unit, but is expected to be inserted into the starting line up this year.  Daequan Cook, who just signed a new 2 year deal with the Thunder, also spaces the floor out nicely for the second unit with his 3 point sharp shooting.  Add in Collison and Maynor and you've got a second team that can play with nearly any starting unit in the league.

The Thunder were one of the few teams in the league with no real glaring weaknesses coming into the season and not needing to really make any offseason moves.  This is a team that will only continue to grow and mature so long as Presti can find a way to keep the core together.  Last season was a year in which this young squad did a lot of growing up and took that next step from "could be in a few years" to a real threat right here and now.  OKC opened a lot of eyes around the league last season and have been either rewarded or punished (depending on your outlook) with being paired up with nearly all of the league's elite teams in the condensed schedule this year.  Clearly the big wigs behind the scenes believe the Thunder are for real and are giving them prime time games to get maximum exposure.  Now it's just up to the Thunder to continue doing what they've been doing.

If this team continues to grow and excel at the rate they have been then it could spell trouble for a number of years to come for Western conference foes and the league's elite.  I believe the true test will be to see how Westbrook responds to all the criticism he took during the post season last year and if he will finally be able to find his own while still incorporating the rest of the team.  If Westbrook begins to distribute the ball like a true PG while keeping his cool, there is no telling how far this young team can go.