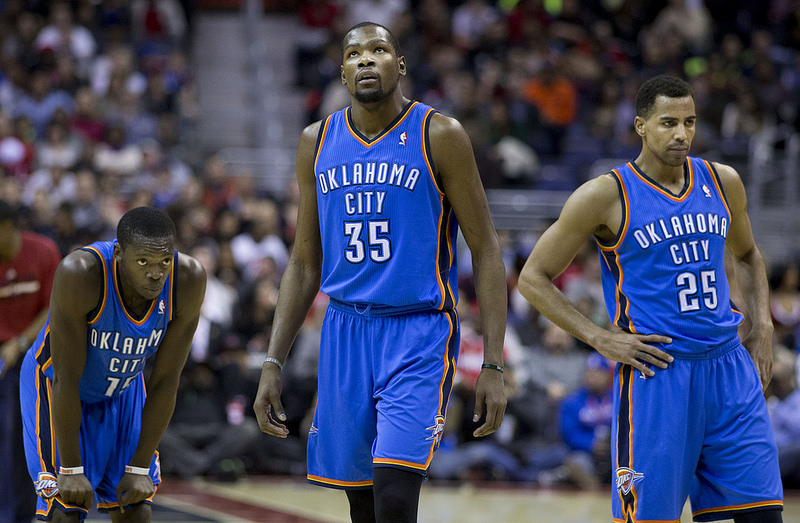 Since the return of Russell Westbrook, the Thunder are 0-2. Westbrook has looked a bit rusty if not downright awful in his first two games back. Scott Brooks hasn't quite figured out how to make the rotation work with Westbrook back in the lineup. Reggie Jackson has looked lost trying to adjust back to coming off the bench. The team that looked so lost without Westbrook in the playoffs last season were beginning to finally find their rhythm without him. Then something happened and the team with the best record in the league got pumped by the Heat and outran by the Clippers.

Is there cause for concern in Loud City?

Yes and no. Let me explain.

First things first, it's just two games, people. Relax. The Thunder went head to head with two of the top teams in the league and came away with two very different losses, yet everyone is ready to lose their minds. Have we become that spoiled already?

It's so easy to sit back and point your finger to the return of Westbrook as the reason for these losses, but the simple fact is there was far from any guarantee that the Thunder win these games without Westbrook. I would contend the outcomes wouldn't have been any different.

What is it that you are so concerned with anyway? The offense after scoring a season low vs Miami? Sure didn't seem to have any problems scoring against the Clippers. The defense? It's been an issue all season against up-tempo teams. They've scraped by and gotten lucky in a number of high-scoring close games this season already. Their luck was bound to run out eventually trying to out-shoot teams filled with shooters.

There are high expectations for this team as there should be. This Oklahoma City bunch is a good team. They are likely going to enter the playoffs as one of the top two seeds in the West. Westbrook has been rusty, but was thrown to the wolves in his first two games back. He knew he would be roasted unless torched the Heat and Clippers en route to two overwhelming victories. Those expectations were never going to be met. Give the man some time.

Up next? Four straight home games vs Cleveland, Memphis, Charlotte, and Philadelphia. I have a feeling that the level of optimism will return to normal levels in the next couple of weeks.

Let's all step back, take a deep breath and remove our fingers from the panic button. Westbrook will find his groove, the role players will adjust and the Thunder will resume their status as the most feared team in the league.