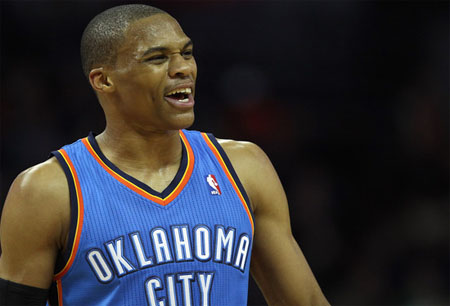 The Thunder have started off the condensed 2011 – 2012 season a red hot 3-0.  So why am I feeling the urge to rip right into them?  Russell Westbrook.

Now, stay with me here.  I know the guy is an all-star.  I know he's one of the "10 best players in the league" yada yada yada.  OK, that's great, but the guy just rubs me the wrong way.  Tonight he goes 0-13 with 7 turnovers.  That's just one game, you say, and besides the Thunder won anyway.  Yes, the Thunder did win anyway, but it was no thanks to #0.  That makes a perfect three straight games of 7 turnovers in each.  That is flat out unacceptable.  The guy just can't seem to grasp the concept of playing the PG position and tries to force it even when he is clearly having an off night.  He hasn't made a bucket all night and Durant can't miss.  What does Westbrook do with time winding down and the Grizzlies within striking distance?  He does his patent dribbling out the shot clock and sends up a horrible one handed fade-away that never has a chance.  I just don't understand how someone can be so selfish.

Am I being too hard on Westbrook?  Maybe.  But I'd just assume make a deal suggested by my partner in crime, TheMayor, and make a move for Dwight Howard.  Send Westbrook, Perkins, and a first rounder and I don't see how Orlando can say no.  I'd much rather have Maynor distributing to KD and Harden with Howard cleaning up everything that rims out.

On the brighter side of things, Durant has already started off the season with MVP-like numbers dropping 30+ in every game thus far and averaging less than 3 turnovers and 5 rebounds.  Durant has come through big in the clutch in close games vs Memphis and Minnesota.  #35 is the star of this team, not Westbrook.  I was hopeful Westbrook had taken some of the criticism from last season to heart and tried to work on honing his game as a true PG during the extended offseason, but it is clear that Russell will be Russell no matter how many detractors come his way.  Brooks refuses to put a tighter leash on Westbrook in fear of pushing him away and having his PG turn against him with only a year left on his contract.

The Thunder are 3-0, but it is not because of Westbrook.  The Thunder are 3-0 because of the superior play from Durant, Harden, Ibaka, Perkins and crew.  Harden has continued to thrive coming off the bench playing possibly even better ball than last season.  Serge has had a bit of a slow start, but is still fulfilling his role on the team.  Perkins came into the season in the best shape of his life and finally with a healthy knee and boy does it show.  Perkins has been a huge boost down low thus far and I am very impressed with his transformation from last season.

Westbrook is heaving up almost the same number of shots per game as Durant, yet connecting on roughly half of the shots that Durant is downing.  Something needs to change.  This team is good, but not good enough to continue to cover for #0 all season long with any hopes of a title coming to OKC.  I don't think he will ever change though and I don't think the Thunder will ever be able to get over the hump with him at the reigns.  I hope I'm wrong, but I wouldn't bet on it.