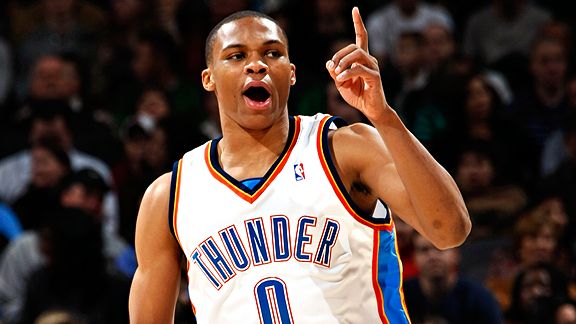 The Thunder have exactly one week from today to sign Russell Westbrook to an extension before he will become a restricted free agent at the end of the season.  So why haven't the Thunder come to terms yet with their all-star point guard?

There are a few things holding this deal up, so let's break them down.

1. Westbrook and his agent feel like he is a max salary player.  Being an all-star last year and 2nd team All-NBA would usually indicate a max player.  However, the Thunder already have a max player in Durant and if they want to have any shot whatsoever at keeping together their young core then Westbrook is going to have to agree to take a little less.  Having Durant and Westbrook both at max salaries would tie up around 60% of the Thunder's payroll and not leave much to keep players like Harden and Ibaka whose contacts run out next season.

2. The Derrick Rose rule.  What does that mean?  Without trying to get all fancy, it basically means if he makes the All-NBA team again this year then he would be retroactively awarded a much larger sum of money then what the Thunder originally agreed to pay him.  Durant is already benefiting from said rule and if the Thunder sign Westbrook to a max extension and then he makes the All-NBA team then that would put the Thunder in all sorts of financial woes.
​3. Is Westbrook really a max salary player?  OK, so I've come off of my hostility towards Russell a bit since my last Thunder article, but I still have to wonder if the Thunder would really want to risk losing out on Harden and Ibaka long term in favor of Westbrook.  By the looks of things it appears as though Presti is trying to work out a deal where he doesn't have to choose and can keep all of the core intact.  With Maynor going down for the year it has become critical for Westbrook to improve his play and for the Thunder front office to put aside any potential trade thoughts.
​In the end, I think Westbrook will become a restricted free agent, but eventually sign an extension with the Thunder.  Ultimately it's up to Westbrook though if he wants to be a team player and accept a little less cash with the opportunity at multiple championships keeping the core together or if he's all about the highest bidder and getting his.  He has already proven quite selfish on the court, time will tell if he has the same mentality off as well.