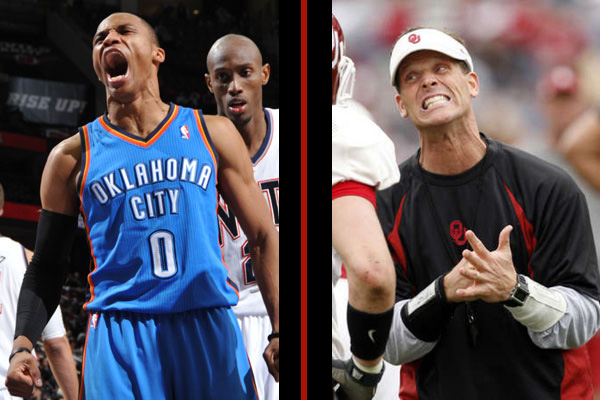 Some major happenings in the world of Oklahoma sports today.

After breaking down Russell Westbrook's extension only a day ago, the Thunder came to terms with Westbrook today on a 5 year $80 million dollar extension.  This is significant for a number of reasons.  While Westbrook's extension is technically a max extension, it is actually still less than what he could have held out for.  Durant is on the "super max" salary which essentially equates to 30% of the teams cap while Westbrook agreed to the "normal max" which places him in the 25% range of the team's cap range.  Now you may be asking why that 5% difference is so significant?  Well, it could mean the difference between re-signing Harden and Ibaka next season and having to let one or both go.  The way that Westbrook's extension was structured also eliminates the risk of the Rose Rule bumping him if he makes the All-NBA team this season.  His 25% is locked and there is also no opt-out clause built in anywhere meaning #0 is going to be in OKC for the next 5 years no matter what.

I did question whether or not Westbrook would be a team player and agree to a little less to help out the overall good of the team moving forward and I am pleasantly surprised at his decision to do so.  While Westbrook tends to drive me nuts like no other player, he is also a consensus top 10 player in the league and the fact that he and Durant are locked in together for at least 4 more years is a very good thing.  Westbrook has rebounded from a horrendous start of the season to really beginning to shine as the Thunder now stand at 12-3 and a force to be reckoned with in the Western conference.

Late last night news also broke that OU defensive coordinator Brent Venables had accepted the same position at Clemson.  With Bob Stoops bringing back brother Mike, he had to know that there was potential for defections within his staff.  While Bob tried his best to have his cake and eat it too, it wasn't too hard for Venables to see the writing on the wall.  The defense has failed the Sooners in recent years and Venables took the blunt of the blame.  Having the opportunity to bring Mike Stoops back was a no brainer, but put Venables in a no win situation.  If the defense improves then all the credit goes to Stoops.  Venables knew his reputation was on the line and if he ever wanted a shot at head coaching then he had to move on.  While there's no question Venables was a top notch recruiter, he simply wasn't getting the job done on the defensive side of the ball.  A Stoops and Venables combo as co-coordinators was probably the optimal solution, but if forced to pick between Brent Venables and Mike Stoops then I wouldn't hesitate for a second taking Stoops.

The hard truth is that the Sooner defense just hasn't lived up to the hype in the recent past and changes had to be made.  I wish Venables well at Clemson, but I couldn't be happier having Mike Stoops running the defense once again.