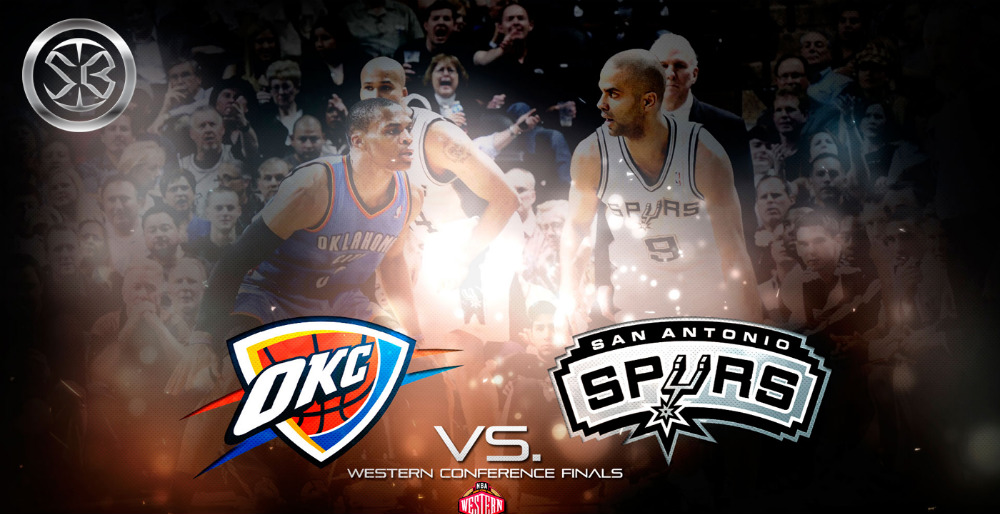 With the Thunder and Spurs set to square off in Oklahoma City tonight, let's take a deeper look at five burning questions from a fan's perspective from both sides. Micah Hixon will be representing the Thunder perspective in this debate while Caleb Hixon will be answering on the Spurs' behalf.

Question #1: Is this a must win for either team?

Micah: A must win? I don't think so. Sure, the Spurs are putting their 19-game win streak on the line, but they also have a comfortable 4-game lead on the Thunder for that coveted 1-seed heading into the playoffs. Remember back in the 2012 playoffs when San Antonio brought an 18-game win streak into the Western Conference finals against the Thunder? The Spurs took the first two games at home, running their streak up to 20 straight, and then dropped the next four in a row to OKC. The Spurs were looking for redemption in the 2013 playoffs, but a Russell Westbrook injury ousted the Thunder before they got the chance to settle the score. The Thunder are 3-0 this season already vs the Spurs including their first match-up way back in November that ended an 11-game winning streak the Spurs had amassed. That said, I'm going to guess this one may mean a little more to the Spurs for their confidence heading into the playoffs. If the Thunder sweep the regular season series with the memory of how the last playoff meeting between the two teams unfolded, it could be bad news for the Spurs state of mind.

Caleb: Popovich always says you can learn more from a loss than a win. So with that in mind, yes, this is a must win. But not in the traditional sense. In the season series between the Spurs and Thunder, OKC leads 3-0 right now. For this 19-game winning streak to pay any real dividends for San Antonio's playoff run, they need to beat the Thunder. They need to show OKC that the previous three match-ups don't mean anything because the Spurs are hot now and that's what counts going into the playoffs. If the Thunder break their streak, not all is lost for the Spurs. But I would feel better knowing that the Spurs can actually win a game against the Thunder if they meet in the playoffs.

Question #2: Which organization has the better front office?

Micah: It's well known that Thunder GM Sam Presti got his start in the Spurs' front office (and is widely credited with encouraging the Spurs to draft Tony Parker). There's no questioning the job he's done in Oklahoma City since accepting the general manager position back in 2007. He reeled off a ridiculous streak of homerun draft picks in three straight drafts starting with Kevin Durant in 2007 followed by Russell Westbrook and Serge Ibaka in 2008 and then James Harden in 2009. However, there's a reason why ESPN ranked the Spurs as the #1 front office in the entire NBA (OKC ranked eighth). The trio of head coach/president Gregg Popovich, general manager R.C. Buford, and owner Peter Holt have already won three championships over the last 12 years. The Spurs have remained title contenders for the past decade and a half with the front office consistently surrounding Duncan, Parker, and Ginobili with a top notch supporting cast. The Thunder are well on their way to being one of the best front offices, but the Spurs are the unquestioned gold standard today.

Caleb: This one at first glance may seem like a toss-up to the untrained eye, and all credit due to the Thunder, but this is a slam dunk in favor of the Spurs. Yes, OKC has come on strong as of late and their front office has done a great job building a team through the draft, but just look at the body of work the Spurs have put together over the last 15 years. 4 NBA Championships, haven't missed the playoffs since 1998, and in Tim Duncan's 17 year career they've only fallen below 50 wins once (the shortened 1999 lock out season). Yeah, I'd say the Spurs take this one. Not to mention ESPN ranks the Spurs front office as #1 in the entire league.

Question #3: Which player on the opposing team worries you the most?

Micah: Tony Parker has been a constant thorn in the Thunder's side over the years. He almost single-handedly took down the Thunder back in January with a 37-point performance. Luckily for the Thunder, Durant was right in the middle of one of the greatest months of basketball ever played and matched Parker for 36 points of his own to give the Thunder a narrow victory. Parker is the x-factor to the Spurs entire offense. If he gets going early, it could be a long night for OKC.

Caleb: The easy answer here is Kevin Durant, but just as Batman needs Robin, Hans Solo needs Chewbacca, and Michael Scott needs Dwight Schrute, KD needs Russell Westbrook. Sure, KD is going to get his whether you like it or not, and no doubt the Thunder can be very dangerous with just Durant, but what makes the Thunder a really scary team is when Westbrook is on fire too. If you can contain Westbrook and make the Thunder one dimensional, then you have a chance at beating OKC.

Micah: Durant is only two games away from the 40-game streak of 25+ points Michael Jordan accomplished during the 1986-87 season (the most in the last 50 years). Just last season the Miami Heat rattled off 27 straight wins, so from that perspective it becomes pretty clear which is more impressive. The scary part? Durant could easily be scoring 30+ every single night if he wanted to. Remember back in January when Durant voluntarily ended his 12-game streak of 30+ points by taking a seat in the fourth quarter? Yeah, that's not the first time he's sat an entire fourth quarter of a game either. Durant takes this one with ease.

Caleb: Honestly, as much as I want to say the Spurs winning streak is more impressive because of the team work involved, the momentum it creates or the quality teams beat in the streak… but come on! 38 games of more than 25 points?! That's nuts! I'm sure Micah will point out how only Michael Jordan has had more in the last 50 years (Editor's note: he did). Think of all the prolific scorers in the last 50 years, only MJ has had a better streak. Not Kobe, not LeBron, not Dirk or even Allen Iverson can say that. Yeah, KD takes this one.

Question #5: What's the over/under number of words Gregg Popovich will utter during his sideline reporter interview?

Micah: Two *walks away from interview*

Caleb: Ahhh Pop and his beloved sideline reports. You'd think with as much success and as long as Pop has been in the league he'd learn how to deal with the interviews. No way, Jose. Pop ain't having it! As a Spurs fan, though, I love it. Popovich is a pure genius and I trust anything he does, even his obvious disdain for reporters. My over under is 20 words. If you get more than 20 words from Pop then you deserve an award.

2 thoughts on “Thunder vs Spurs: Point/Counterpoint”