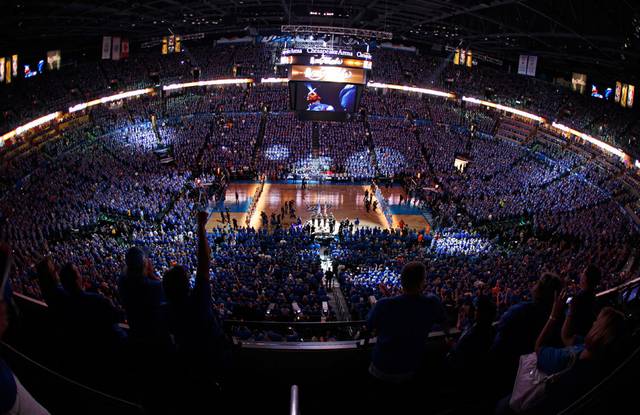 • Seems like it's been a bit of a rollercoaster for the Thunder since the all-star break. Lost three in a row. Won three in a row. Lost two in a row. Won two in a row. There's a little more meat to those wins a losses though. Such a two losses sandwiched in there to absolutely terrible teams (Cavs and Lakers). Then there's the win over Houston who had been red-hot coming into the contest. I'm not sure if this Thunder bunch are lacking motivation towards the tail-end of the season or what it is, but they've got to remain focused and motivated or risk losing a top seed in the West. For the first time in awhile, they looked motivated vs the Rockets and it was good to see. I'm sure the whole story regarding James Harden now playing in Houston and the Patrick Beverely/Russell Westbrook incident from the 2013 playoffs was still fresh on the Thunder's minds. Speaking of Beverely/Westbrook…

• Let's go ahead and add Patrick Beverely to the list of most disliked/dirty players in the NBA, ok? He and Ron Artest are on my short list off the top of my head (though I'm open for further suggestions). Everyone knew it was an unwritten rule Beverely broke when he crashed into Russell Westbrook during the playoffs last year while Westbrook was dribbling across half court to call a timeout. Some wrote it off as "playing to the whistle" or whatever bogus excuse they could come up with, but Beverely removed all doubt of his intentions when he tried the exact same thing again on Tuesday night. Beverely knew exactly what he was doing and the refs immediately T'd him up for his shenanigans. There's a difference between playing hard and just being an idiot. But, of course, Bill Simmons applauds him.

• Can't say enough good things about Blake Bell. Despite taking the backseat to Landry Jones for a couple of years and then having a freshman named the starter over him after Jones departed for the NFL, Bell has seemingly never wavered. He's now set to move to tight end to try and help the team however possible. I'd imagine most college other young college kids would throw a temper tantrum and go searching for a new school. Check out the excellent piece on Bell from my partner in crime penned this week. Highly recommended.

• Are NBA team really tanking? Royce Young over at Daily Thunder has a great piece on team tanking. I think most fans agree that, at a minimum, certain teams start eyeing draft position vs overall record in the latter parts of a season. Royce Young does a good job of breaking down different kinds of tanking and why the whole thing has likely been blown out of proportion.

• Former Oklahoma running back Damien Williams says he has no hard feelings towards the school or coach Stoops after he was dismissed from the team last November. In a classy move, Stoops allowed Williams to return to Norman for OU's pro day on Wednesday. When asked, Williams refused to elaborate on the nature of rule violations that got him suspended and ultimately dismissed from the team.

• While Durant may not be able to repeat his insane 50/40/90 performance of 2013, Ben Golliver at SI.com thinks Durant is on pace to join the possibly more prestigious 30/30 club.

• Oklahoma running backs coach Cale Gundy sent out an awesome tweet earlier in the week and then promptly deleted it. The tweet read: "Looks like someone came up short again. You better take that SEC country somewhere else. Let's Play Faster. #Boomer" Wish he had not deleted it as he's 100% right. Nick Saban was lobbying for a dumb rule change to try and slow down the up-tempo offenses. The talk of the new rule didn't seem to stick and Gundy fired off a nice little warning shot to Saban reminding him of the Sugar Bowl beat down from just a couple of months ago.