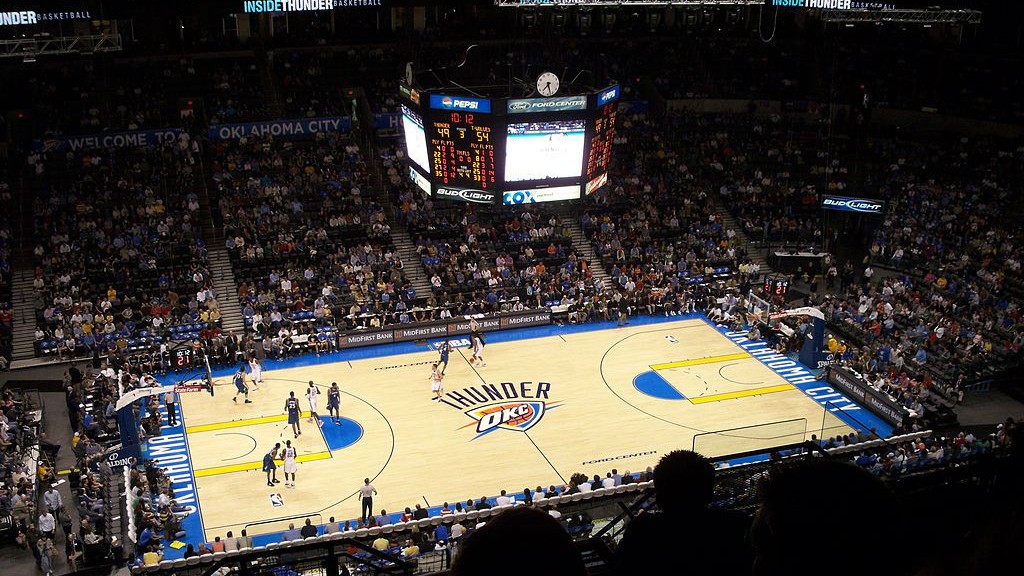 • On Wednesday, the Thunder continued their streak of taking care of business against another elite Western conference foe after dropping a game earlier in the week yet again to the desperate Suns. I'm going to take the positive spin on this one and say the Thunder are in good shape heading into the playoffs having defeated the 1-seed Spurs and 3-seed Clippers in consecutive weeks. Dropping close games to teams fighting for the final playoff spot should not be overly examined. One thing that does not make me all warm and fuzzy inside is the likelihood over the Thunder's first round match-ups. Currently OKC is slated to face Phoenix in the first round. Yesterday it was Dallas until they dropped a game to the Spurs last night. Neither Dallas or Phoenix are great match-ups for OKC. Not that I'm concerned with losing a seven game series to either team, but I'm not terribly keen on the idea of being pushed to the brink in the first round.

• So KD's streak came to an end this week as well. Durant had 23 points though three quarters of play on Tuesday, but elected to sit the entire fourth quarter and let yet another streak die out. Earlier in the week he was quoted as saying "I wish it was over" (via Darnell Mayberry​). It looks pretty obvious that Durant wanted to break Jordan's streak and then end it. It was becoming a beatdown answering the same questions about the streak night in and night out and KD was ready to focus on the playoffs and not the streak. Would it have been cool for Durant to finish out the regular season with the streak alive and pass Oscar Robinson for second all-time only behind Wilt? Sure, but it was the smart move casually letting the streak end on Tuesday. Everyone knows it could still be going, but now the Thunder can focus squarely on the playoffs and not be bothered with anymore questions about "the streak."

• UCONN's men and women's teams each took home a college basketball championship this week. An impressive feat, no doubt, but this was the second time it's happened in the last 10 years. I'd do a little more research if I wasn't so lazy, but I can't remember any one school ever accomplishing the feat even once before (including my vast knowledge of women's basketball history) and UCONN has now done it twice? Holy cow. I knew the women's team has been dominant for some time, but it surprised me a bit to learn that the men's team has won the championship four times in the last 15 years, more than any other school. Serious props to UCONN. Caleb Hixon had a solid write-up this week wondering which team's run was more impressive this year.

• Mark Schlabach details how Oklahoma QB Trevor Knight grew up a Longhorn fan and dreamed of one day playing in Austin. As it turned out, Knight never even made an official visit to Texas and eventually ended up in Norman. Chalk up another recruiting homerun for Mack!

• Oh yeah, Oklahoma's spring game is tomorrow. If things like spring game's interest you, Brandon Chatmon has a nice little preview of the game and what to watch for. You'll have to forgive me in advance for my lack of interest.

• The Net's completed a season sweep of the Heat on Tuesday night. The game ended with the Heat down one and LeBron going up for the game winner at the rim only to be denied by…Mason Plumlee? Feel free to watch the replay over and over and see LeBron flail about like a child demanding a foul. Sorry, King James, it was a clean block and oh so satisfying to watch.

• According to a panel of ESPN voters, the MVP race is over. This has been more or less a foregone conclusion since somewhere around January. While most would still consider LeBron the "best player" in the league, if KD collects a scoring title, MVP, and NBA championship this year? Watch out. A big "if" on that last point though, I know.

• The Master's is being played this weekend and will likely be watched and obsesses over by many a golf fans. With Tiger not in the field, I'm sure there will be a bit of drop off in casual fan interest, but it should still be an interesting tournament. Schedule me for an hour or two on Sunday afternoon to catch the end.