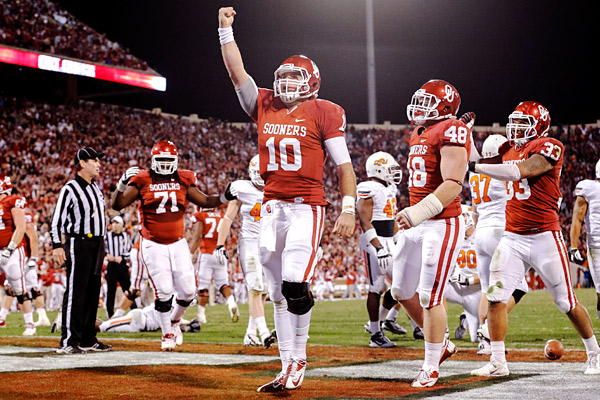 • So Blake Bell is apparently in the process of transitioning to tight end. Granted he has a natural frame to be a great tight end, I just wonder how effective he will really be at the new position. Not that there are really any premier players ahead of him on the TE depth chart that concern me, but I'd personally like to see him continue to push Knight at the QB position. We all know that Knight's heavy dose of QB scrambles put him at a high risk for injury and I'm not sure how great I'd feel having to turn the reigns over to another freshman if he were to go down again. I'll give Bell this though, he is one heck of a teammate sucking it up and moving to a position of need as opposed to just taking his ball and going home (transferring).

• The Thunder have the best record in the NBA headed into the all-star break and are currently the favorite to win it all this year, at least according to a few ESPN writers. Westbrook's injury may have turned out to be a blessing in disguise, granting that precious extra playing time and responsibility to the likes of Jackson and Lamb that they likely never would have gotten with a healthy Westbrook. The Thunder were ill-prepared for life without Westbrook last season, but they are a better bunch this time around. Plug a healthy Westbrook back into the lineup and you've got the favorites to win it all this year.

• Tip of the hat to my partner in crime on his fantastic breakdown of the recent Sooner signings this week. While doing my best to keep up with signing day, I still learned quite a bit from the recaps on the offensive side of the ball. If you have any interest at all in the future of the Oklahoma football program, I encourage you to go check it out. You will not be disappointed. Keep an eye out for the defensive players breakdown coming in the near future.

• Is it too soon to crown Kevin Durant the MVP? Nope. While LeBron has won four of the past five, Durant has been vocal about being tired of playing second fiddle. Being the second best player in the world isn't good enough for KD. He's on a mission to be the best and is putting on a pretty good display of those talents lately. Barring King James leading the Heat on another 30-game win streak, this race is as good as over.

• So Mark Schlabach has Oklahoma listed at #5 in his Post Signing Day "Way Too Early Top 25" rankings. This was no doubt based on the Sooners stellar recruiting class off the heels of their Sugar Bowl win over the vaunted Crimson Tide, but there is still a lot of work left to be done in Norman. Trevor Knight is the key to the Sooners success in 2014. If he builds off his fantastic Sugar Bowl performance? OU should earn a bid to the first ever college football playoffs. If he reverts back to the Knight from the 2013 season opener? Well, let's not talk like that.

• Russell Westbrook is still scheduled to return sometime after the all-star break, but the Thunder aren't ready to commit on a specific date just yet. February 20th is still the target date, but it's far from set in stone. Fingers crossed for no further setbacks. I've enjoyed watching this team persevere without their all-star point guard, but I enjoy watching them more with him on the court. And let's be honest, any attempt at making a serious push towards an NBA championship has to include a healthy #0.

• Remember when everyone was so sure that Bob Stoops was going to be the next head coach of the Cleveland Browns? I believed it about as much as the "Saban to Texas is a done deal" rumors. Stoops is going to finish out his career in Norman, mark it down. There are plenty of reasons to list why, but they are too many to go over in this small space.

• Disagreed with my opinion piece on why the Thunder shouldn't trade Westbrook? Want some substance backing up my take? Sign up for an Insider account and let the big boys do the heavy lifting. The Thunder are "great without Westbrook; better with him."

• Former five-star Oklahoma recruit Trey Metoyer was dismissed from the team last October after being charged with indecent exposure. So what's Metoyer been up to lately? Oh nothing special, just kicking back and enjoying another round of indecent exposure charges. Seems like a lifetime ago that we were drooling over him during spring training and couldn't wait for #17 to explode into the next great WR in Norman. Yet another tale of a sad waste of talents. Metoyer finished his stint with the Sooners with a mere 19 catches for 166 yards and two touchdowns.

• Oh wait, the Westbrook trade rumors were all just made up by some random blogger? Never mind then, move along, nothing to see here. Per Royce Young: "The Thunder aren’t trading Russell Westbrook. Under any circumstance. It’s not happening. Therefore, any subsequent thing that involves his name and the word 'trade' in it should be ignored entirely, unless you just enjoy wild, pointless speculation."