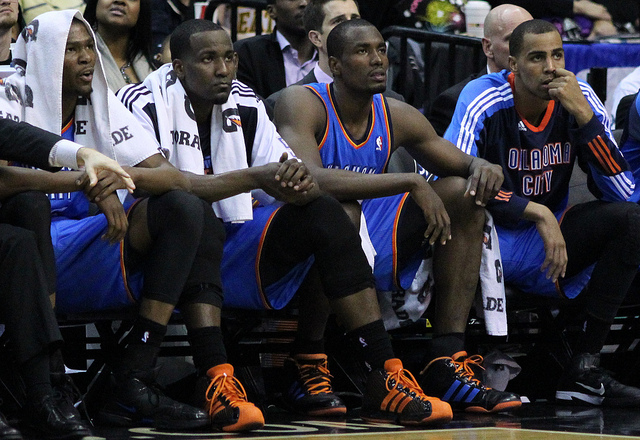 • So that tidbit I snuck in my last post about the optimism level rising in OKC? Yeah, not so much. A home loss to Cleveland? Giving up 42 points in the 4th quarter? Ugh, I have no idea what's going on now. I'm still not panicked, but definitely concerned. This was a prime game to make a statement, yet the Thunder still appeared a bit disinterested in playing any sort of semblance of defense. Here's to hoping that the Thunder take care of their next three average opponents and get their swagger back.

• My partner in crime knocked out the second part of his 2014 Sooner football signings class this week that I'd highly recommend checking out. This time he digs into the defensive recruits. Get familiar with their names, these guys are the future of the program.

• The Thunder are 0-4 this season without Kendrick Perkins. Make of that what you will. My mind is blown.

• Former Oklahoma quarterback Kendal Thompson is transferring to Utah. This comes as a shock to exactly no one. Despite an injury just before the 2013 season, Thompson battled back was given a shot to prove his worth. It came during a stretch of miserable play from Bell and Knight with the potential to snatch the starting position with a good outing, but Thompson looked less than impressive. Thompson graduates in May so he will be eligible to play immediately for the Utes next season.

• A funny line from Royce Young over at Daily Thunder regarding the loss to the Cavs: "You could put the classification of the way the Thunder lost this one somewhere between bad, and season three of Homeland." Come on! Season three wasn't that bad!

• Former dismissed Oklahoma running back Damien Williams ran an impressive 4.45 40-yard dash at the NFL combine, good enough for the 4th best among running backs. Color me impressed. I assumed Williams' chances at an NFL career went down the drain when he was booted off the team last season. A public reason was never given for his dismissal, but with that kind of speed he just might find a place on an NFL roster.

• The Thunder are looking at signing a potential free agent or two. If there is anything just in this world, it will not be Metta World Peace Ron Artest.

• Keep your eyes peeled for a new Thunder basketball app that should be hitting the App Store any day now. I'm told it will be called "The Thunder App" and be a one-stop shop for Thunder fans. Very nice. Will do a review on it once I see it show up.